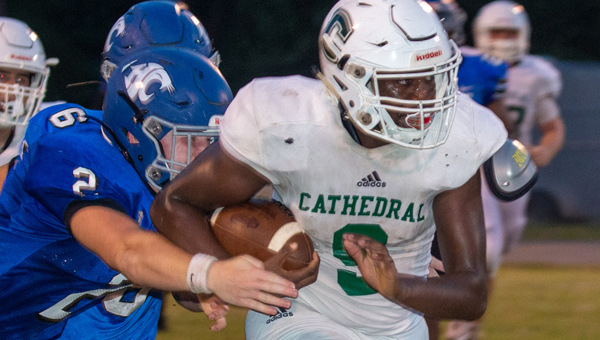 NATCHEZ — The Cathedral High School Green Wave will take on a familiar opponent Friday night in the first round of the 2020 MAIS Class 4A Playoffs when they place host to the Hillcrest Christian School Cougars.

Kickoff between Hillcrest Christian and Cathedral at D’Evereux Stadium is set for 7 p.m. When these two District 4-4A opponents met way back on Friday, Sept. 4, the Green Wave cruised to a 51-7 win over the Cougars.

“Just looking forward to playing a home playoff game for the second year in a row,” Green Wave head coach Chuck Darbonne said. “We’re very excited to be hosting in front of our home stadium.”

Cathedral enters the playoffs with a 9-1 overall record and as the No. 5 seed. The Green Wave finished second behind No. 1 seed and defending Class 4A state champion Riverfield Academy in the district standings with a 2-1 mark.

Hillcrest Christian somehow made the playoffs as the No. 12 seed despite a 2-7 overall record and an 0-3 record in district play. However, Darbonne said the Cougars team that will line up across the field from the Green Wave will be different from the one they faced earlier this season.

“They’re a much-improved team from the time we played them,” Darbonne said. “They picked up a couple of players. They had a couple of players get healthy. They lost to (No. 7 seed) Brookhaven (Academy) by 10 points. It didn’t surprise me at all that they made the playoffs.”

The homecoming festivities that were scheduled for last week against St. Aloysius High School but were postponed after a student tested positive for COVID-19 earlier in the week will take place Friday night.

Among the keys to victory Darbonne pointed out for his team are being efficient in the passing game, being the most physical team on offense, and the defense reading its keys and keeping Hillcrest’s best offensive player contained.