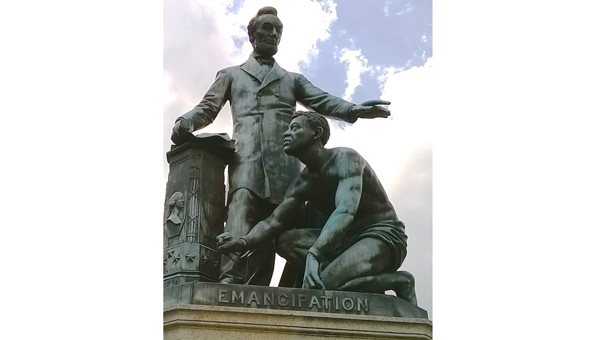 NATCHEZ — For 46 years the only monument dedicated to assassinated United States President Abraham Lincoln stood in Washington, D.C., and that monument was primarily funded by freed men and women in Natchez.

That monument is known as the Emancipation Memorial and depicts Lincoln standing with the Emancipation Proclamation in his hand while a newly freed slave begins to stand with broken shackles at his feet.

The Emancipation Memorial still stands today but recently was the subject of controversy when protestors called for the statue’s removal.

That is when playwright and poet Marcia Cole stepped in.

“The connection between Natchez and Washington, D.C., is amazing, and, up until a few weeks ago, I did not know about it,” Gibson said, adding he learned that newly freed slaves, in the months after the Civil War, wanted to honor the man who closed the ugliest chapter of American history: slavery.

Freedwoman Charlotte Scott of Virginia conceived the idea of a monument to Lincoln after John Wilkes Booth assassinated him in 1865, saying Lincoln was “the best friend the colored people ever had.”

Scott sent her proposal and the first $5 of funding that ultimately went to the Western Sanitary Commission based in St. Louis, which operated war relief efforts and supported the welfare of freedmen and freedwomen.

Word of Scott’s charity and mission was printed in newspapers and it spread among communities of freedmen and U.S. Colored Troop veterans throughout the nation.

“These newly emancipated citizens raised a lot of money — over $16,000. The majority of that money came from Natchez,” Gibson said.

After 1865, Natchez was home to large population of Union troops, and Fountain said more than 200,000 Black soldiers and sailors had fought with the Union for their own freedom.

Fountain said approximately 17,000 of those Union servicemen were from Mississippi.

Natchez was home to the 58th, the 63rd, the 70th and the 71st Regiments of the U.S. Colored Infantry as well as the 6th U.S. Colored Heavy Artillery Regiment.

Fountain, who is from Natchez, said she is a descendent of those servicemen and she has studied many archival letters from Natchez, which express their strong desires to support the monument.

“I feel proud of my regiment for their liberal contributions in honor of our lamented chief,” Fountain said, quoting Natchez Lt. Col. John P. Coleman.

“Every dollar of this money has been subscribed by the Black enlisted men of my regiment, which was only an aggregate of 683 men,” Fountain said quoting a letter from Col. W.C. Earls, commander officer in Natchez. “Much more might have been raised, but I cautioned the officers to check the noble generosity of my men rather than stimulate it. Allow me to add that the soldiers expect that the monument is to be built by Black peoples’ money exclusively.”

Fountain said Earls pointed out the small number of men because the contributions averaged one-third to one-half of their monthly earnings. The Freedmen of Natchez gave another $312.38. Another regiment collected $1 from every enlisted man to contribute.

Altogether, the Black servicemen and freedmen gave nearly $10,000 within a matter of weeks after learning about the mission, Fountain said. The total amount collected was around $18,000.

“It is clear…the vast majority of those funds were the funds donated by the Natchez U.S. Colored Troops,” Fountain said.

The Natchez Troops and local freedmen combined contributed more than $16,000 of the $18,000 total budget, Fountain said.

Thomas Ball was chosen to cast the monument, and the final design.

It was installed in and dedicated in 1876, which was 11 years after Lincoln was assassinated.

“The monument stands today at our nation’s capital because of Charlotte Scott’s proposal and…because of the generosity of those U.S. Colored Troops Natchez soldiers,” Fountain said.

At the height of nationwide racial justice protests in the aftermath of George Floyd’s death at the hands of police officers earlier this year, protestors gathered around the Emancipation Memorial and demanded it be removed.

Cole personally left her home to defend the monument, she said, challenging the protesters with her deep knowledge of the monument. Cole said she told the protestors the full history of Scott and the will of the freedmen who placed the monument there.

“Miss Charlotte had a reputation for industry, intelligence and moral integrity,” Cole said.

Many who criticize the monument, feel the composition of a Black man kneeling before a white man reinforces a subservient narrative.

Cole said it might appear that way at first, but anyone who looks closer could see that the freedman is not kneeling.

Cole said his face is looking upward and both of his knees are not down, almost as if he is about to sprint.

People in attendance approached Cole and asked for her help in saving the monument, so Cole said she helped develop videos and educational information about the monument to educate people.

“I was afraid that if it was removed, it would also remove evidence of Miss Charlotte’s legacy and all those who contributed to it, and I didn’t want her legacy to be lost,” Cole said.

Gibson said he would like to see a permanent exhibit created and installed in Natchez one day. In the near future, he would also like to host an in-person event with Cole and Fountain to share the story more broadly.

“This is a story that needs to be told and it needs to be a permanent exhibit in our visitor’s center,” Gibson said.

Although there are no concrete plans yet, the City is brainstorming ways to incorporate and fund an exhibit.

“It’s too early to say, but we have already started that discussion,” Gibson said.

“We have been wanting to broaden the history of Natchez for a while,” Gibson said. “We’ll do whatever we can to…see how this can become an exhibit here.”