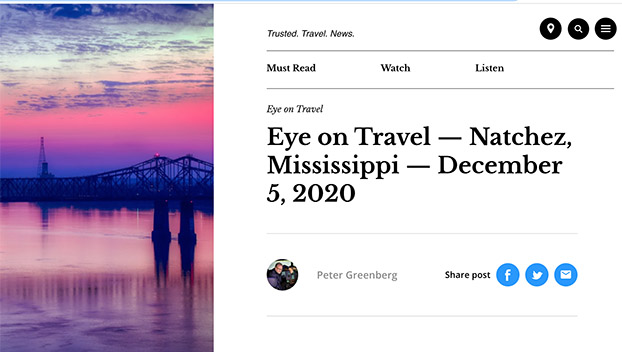 Emmy Award-winning reporter and producer Peter Greenberg spent a day in Natchez recently for his weekly Eye on Travel broadcast. During the broadcast, Greenberg talked to locals, including Natchez Democrat general manager Jan Griffey, about what makes the area special. Greenberg also talked with Natchez Mayor Dan Gibson about the city’s remote worker incentive being offered to folks who want to move to Natchez.

Click this link to hear this week’s broadcast from the Natchez Grand Hotel.

Greenberg is one of America’s most recognized, honored and respected front-line travel news journalists. He is Travel Editor for CBS News, and appears on CBS This Morning, CBS Evening News, and across many CBS broadcast platforms. Peter was named one of the most influential people in travel by Travel Weekly, along with Al Gore, Bill Marriott and Richard Branson.