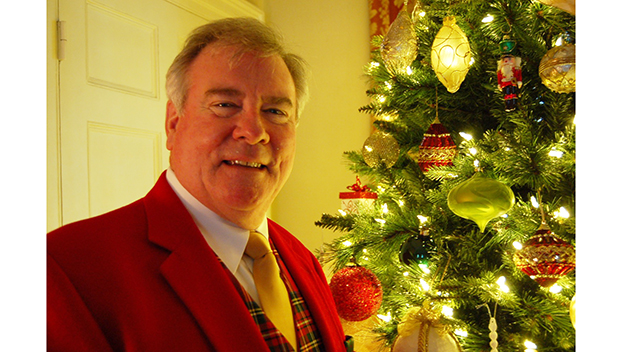 David Hawkins is this year’s Santa Claus Committee Santa, but since no parade or after party could be held this year due to the COVID-19 pandemic, Hawkins will reign again next year as Santa. (Sabrina Robertson, The Natchez Democrat)

NATCHEZ — The year 2020 is undoubtedly one for the history books.

As a result of the COVID-19 pandemic, the Natchez Santa Claus Committee is celebrating a nearly century old tradition differently than they ever have before.

As a result, organizers said they believe David Hawkins, the 2020-2021 Santa, will be the first in the committee to ever wear the red hat and coat for two years.

The Santa Claus Committee traditionally presents the year’s Santa Claus, who is elected from among its members, during an annual Santa Claus parade.

This year’s parade, however, will not be held because of the COVID-19.

Johnny Byrne, who co-chairs the committee with Tony Byrne, said Santa would only be presented this year while safely distributing presents to children at the old Braden School on Christmas Eve.

“Because of COVID, we’re not doing the parade and the parties and all of the gatherings,” Johnny Byrne said. “Santa Claus is going to be out to distribute the gifts on Christmas Eve and will actually be able to do it again next year.”

The Santa Claus Committee was founded in 1928 with a small group of businessmen who were concerned that not all of the community’s children would have a merry Christmas.

In addition to participating in the annual gift distribution facilitated by the Natchez Children’s Christmas Tree Fund and Catholic Charities, this year the committee celebrates 92 years of supporting other charitable organizations through membership dues.

A trademark of Christmas in Natchez is an odd yet magical celebration on Christmas Eve when a committee of businessmen parade through Natchez neighborhoods — throwing candy and stopping for meals and a gift giveaway for children in need before having a Christmas party finale at Santa’s house.

Hawkins, the 2020-2021 Santa, will be the first of the Santas to do the honor of passing out toys for two years, allowing him the opportunity to participate in the parade and host a Christmas party in 2021, Johnny Byrne said.

After a year facing a pandemic, Hawkins said he would be happy to see 2020 slip away and become a distant memory.

However, Hawkins said he is excited to be the first in a long line of Natchez Santas to deliver toys to the children twice, which to him is the best part of the annual celebration.

“In years past, when I was not Santa, I’ve stood in the back and watched them pass out the toys,” Hawkins said. “The kids get so excited, particularly the young ones. They still believe in Santa and still have that image. … They are so excited to be able to go up there and sit on his lap. I’m going to miss the parade, but I’ll be sure that we meet the end focus, which is giving gifts to the kids.”

Hawkins, a native of Nashville, Tennessee, became acquainted with the Santa Claus committee through his wife Marjorie Feltus and her family, which has had multiple generations of Santas, the last one being Hawkins’ father-in-law, Richard Feltus Jr. in 1972.

The Feltus family owns and operates Linden B&B off of Melrose Avenue.

Hawkins and his wife live in a cottage on the property when he is not conducting business in Nashville as a commercial architect.

Hawkins grew up with four younger brothers who were full of energy and excitement on Christmas and would play tricks on each other.

“I grew up on a farm and we would always go out and find a cedar tree and bring it in,” he said, adding each family member had a part in the decorating.

“My mother was studious with the tinsel, which was one of the most frustrating things to put on. I was always in charge of the lights. I would test them, change out the bulbs and make sure they were in the right place. I always made sure the lights were deep in the tree so the entire tree would just illuminate.”

Hawkins said the Santa Claus Committee introduced him to a lot of Natchez and the good people who make up the community.

“Particularly as someone who is not from here, the committee gave me the opportunity to see a lot of Natchez homes and meet a lot of gracious people,” Hawkins said. “The atmosphere that they have — to open up their home and feed all of those people at their expense to support the cause — is just fabulous. Natchez has a very giving attitude and a giving personality. It is just heartwarming.”