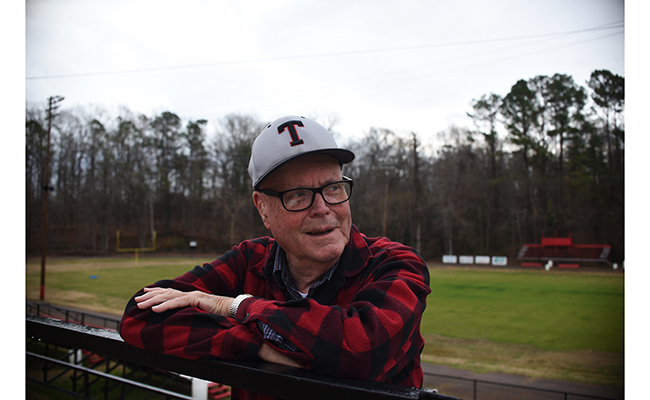 Kent Knee, who was statistician, photographer and booster extraordinaire for more than 40 years at Trinity Episcopal Day School and later at Adams County Christian School, died of complications related to the COVID-19 virus at approximately 7 p.m. today at Merit Health Natchez.

Knee later went to work with the Mississippi Department of Human Services and became a child abuse investigator and later a supervisor for the department. He retired from that job many years ago, Hudson said.

“Knee took a part-time job as Christian education director at Jefferson Street,” Hudson said. After that, he became a volunteer youth counselor for the church.

Knee attended almost every game of every sporting event and most other events at the school.

“What he was known for is, every year, he would create a booklet for every senior and gave it to them when they graduated,” Hudson said. “He spent hours and hours and hours putting together those booklets.”

At Jefferson Street, Knee did something similar for the youth of the church.

“All of the photos from retreats and summer trips he would make into a book and give that to the kids,” he said. “That was the kind of stuff he enjoyed doing. He was an every Sunday, every Wednesday night person at the church. He was completely devoted.”

Having no children of his own, Knee had a desire to be “a person who lightened the lives of children and showed them affirmation,” Hudson said.

Hudson said Knee was a Midwesterner, originally from Nebraska.

“He had that Midwestern personality. He would tell it like it is,” he said.

For his first couple of days after learning he had COVID, Hudson said Knee had few issues, but “after three or four days, he was hit hard and went down pretty quickly. It’s a shock to a lot of people and he will certainly be missed.”

“I have 25 years in education and coaching. Mr. Knee was with me the whole time at Trinity and I was proud when he came over to AC with us. He jumped right in and was a fan favorite,” King said.

He said Knee worked to follow the teachings of Jesus.

“Thinking of Mr. Knee, I really believe all those traits we think of when we think of Jesus — loving, giving, compassionate, gentle — that’s what I saw in Mr. Knee. I think Jesus was his motivation, to give back and be humble and to serve his fellow man,” King said. “He was my very dear friend. He was the most selfless person I ever knew. He gave and gave and gave. I am a better man for having him beside me all these years.”

The Rev. Bill Barksdale, pastor at Jefferson Street, informed his congregation of Knee’s passing in an email sent Friday night.