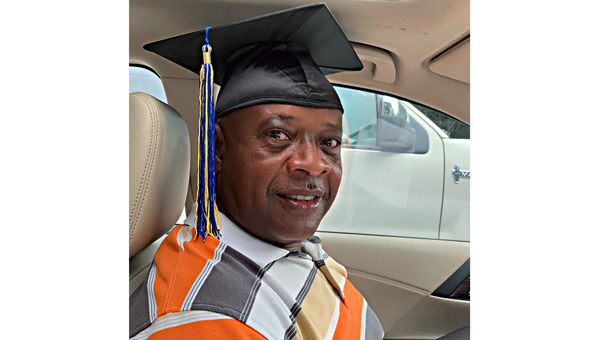 Larry Woods wears his graduation cap after graduating with a master's degree in Christian counseling from Kingdom Theological Seminary on Sept. 5, 2020, only a couple of months before he contracted COVID-19. (Submitted photo)

NATCHEZ — Larry Woods, who died Jan. 4 in the ICU at the University of Mississippi Medical Center in Jackson of complications brought on by COVID-19, is remembered as a man of service to his community.

“Larry was a great individual,” said Melvin White, pastor of Pilgrim Baptist Church in Natchez. “He had what you call a gift. The Bible speaks about different gifts that God gives to us and one of those gifts is called the gift of help. Larry had that gift.”

Woods’ wife of 38 years, Bonita, said Larry, who lived in the Cranfield community, was always involved in the Adams County community but became more involved after he retired from his job as a millworker approximately 12 years ago.

“Once he stopped working, woo!” Bonita said. “He was more busy in retirement than he ever was working.”

Larry was a member of Mount Olive Baptist Church in Sibley where he was active, serving as a deacon for more than 30 years and taking leadership roles in the church, Bonita said.

Despite his longtime membership at Mount Olive, Bonita said Larry was fond of visiting different churches.

“You would think he was a member of every Baptist Church in the area,” Bonita said.

Larry would mentor younger people in the community, Bonita said, through the people he met at churches and the organizations he was involved in, including being a Shriner.

Bonita said that after Larry’s death, one of the younger people he had mentored, Jesse Pollard, told her that Larry was a good mentor to him and many other younger people in the community.

Pollard, 39, said he had known Larry for the past five or six years from Larry’s visits to Antioch Missionary Baptist Church on Liberty Road.

“It hit me real deep that he passed,” Pollard said. “I really wanted him to make it (so he could) tell how he overcame the illness. But God knows best. He left encouraging words, and I’ll never forget those words.”

Bonita said she and Larry both contracted COVID-19 in mid-November. She recovered but Larry had complications that developed into pneumonia and he later developed blood clots. He eventually had to be transferred to UMC in Jackson where he struggled in the ICU before dying there on Jan. 4.

“I will miss his integrity,” Pollard said. “He always was trying to do something positive for the community.”

White, who is also moderator of the Antioch Missionary Baptist Association, said he appointed Larry to be the director of the Men’s Department and the Laymen’s Department of the organization. Larry organized the men to conduct school supply drives within the groups, toy drives and other events. When the COVID-19 pandemic hit, Larry went to work organizing food drives.

White said Larry reached out to the Red Cross and the Salvation Army in McComb and the AMB association came the area distributor for food drives.

Michael Winn served under Larry as president of the Laymen’s Department of the AMB association.

Bonita said Larry always had a big, infectious smile that drew people to him.

“He loved people,” Bonita said. “Anything that would put him around people, he just loved doing it.”

Larry also loved the Bible and even went to seminary, not to become a preacher, Bonita said, but to learn to better understand the Bible.

Larry earned a master’s degree in Christian counseling from Kingdom Theological Seminary on Sept. 5, 2020, not long before he contracted COVID-19.

“He is well missed,” White said. “He was just a great, all-around person, good person. He had a great spirit. He did not meet a stranger at all.”

County board president says Kaiser knew about problems with…