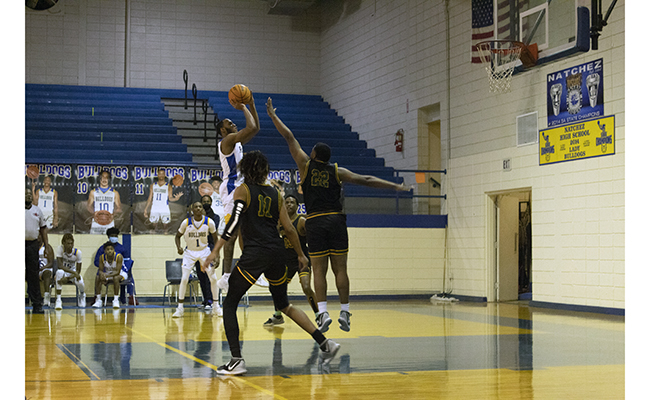 Trevon Jackson takes a jumpshot in the second half of Natchez’s game against Jim Hill. Natchez won 53-43 with Jackson as a leading scorer with 17 points. (Hunter Cloud for The Natchez Democrat)

Travis Berry contributed with 15 points and Kameron Carter added 10 points for Natchez High, which used a tenacious defense to hold Jim Hill in check in the first half.

“Trevon’s been leading our team. He’s been aggressive offensively and defensively. He gets a lot of steals,” Bulldogs head coach David Haywood said. “Travis, I think this guy’s got a lot of talent. The more games he plays, the better he’s going to get. He’s making open shots. He’s getting to the basket.”

“Kameron, he’s a sophomore. He’s got a high IQ for the game on both ends of the court. He does what we ask him to do. He can play guard. He can play in the post. He’s very versatile.”

Defense was a pivotal factor for the Bulldogs, especially in the first and second quarters. They took a 13-4 lead after one quarter of play and 24-10 at halftime.

“We started off, our defensive intensity was good. But we got stagnant on offense in the second quarter. And that eventually affected our defense,” Haywood said.

Jim Hill tried to cut into Natchez High’s lead in the second quarter, but the Tigers could not make enough stops to put the pressure on the Bulldogs. Jim Hill did, however, manage to outscore the Bulldogs 12-10 in the third quarter and 21-19 in the fourth quarter.

“Jim Hill’s got some good players. I knew it would go back and forth. It was a good game for us,” Haywood said. “It’s a district game. We’ll see them again and we may see them again in the district tournament.”

The Tigers were led by Avaunte Griffin with 10 points and Jessie Williams with nine points. JaQuavious Jones chipped in with eight points.

The Lady Bulldogs were scheduled to play the Jim Hill Lady Tigers, but that game has been postponed to a later date. Head coach Alphaka Moore said it will likely be the end of January.

“They played a team on Friday who had someone who tested positive (for COVID-19), so they’re in quarantine,” Moore said.