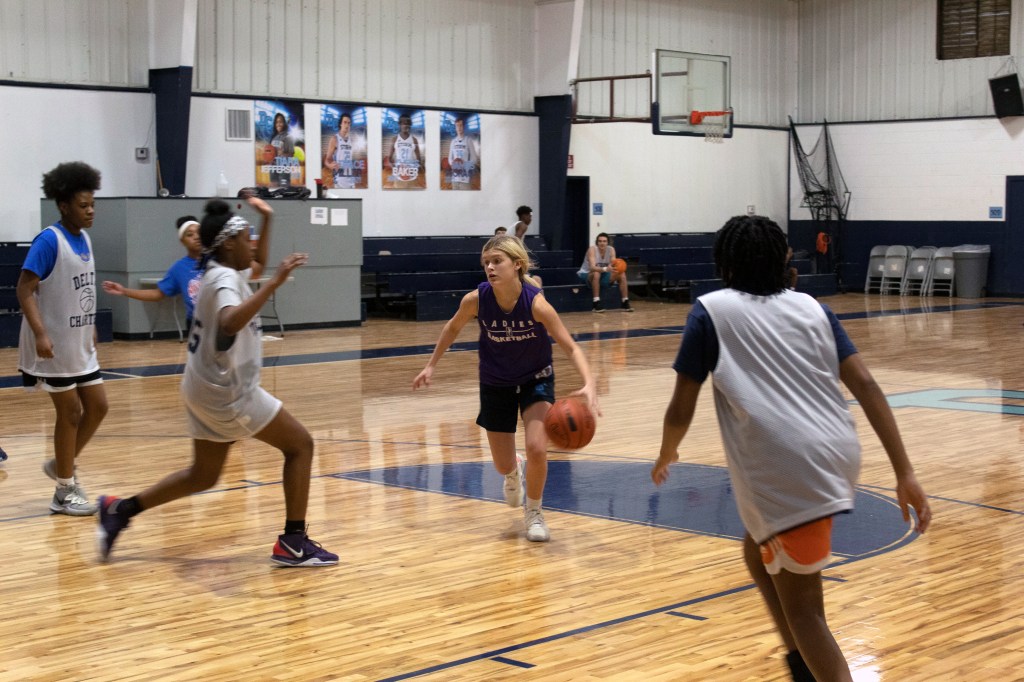 Shivley Blaney drives the lane on a pick and roll in practice at Delta Charter Wednesday afternoon in Ferriday. Blaney is a senior on Delta Charter’s team. (Photo by Hunter Cloud for The Natchez Democrat)

Only Delta Charter and Monterey High School are taking the hardwood in Concordia Parish this basketball season as the schools opted to play despite COVID.

Vidalia and Ferriday made the decision to not play this season due to concerns about COVID-19. Concordia Parish School District Superintendent Whest Shirley said he left the decision up to the schools and their principals.

Monterey high school’s head coach Erick Richard said the school is taking the necessary precautions to continue playing. Monterey does not play football like Vidalia or Ferriday who had football seasons.

Richard said playing Basketball is an escape for people in Monterey from everyday life. Richard said this season is not a play at all costs season, but instead Monterey is taking precautions and trying to get the season in as safely as possible.

Delta Charter girl’s head coach Ronald Ellis said another factor in his decision to play this season was because of the two senior girls on his team. Ellis played basketball at Vidalia High School and at Grambling State University, and said he could not imagine not being able to play his senior year.

Ellis said as long as there was an opportunity to play basketball, Delta Charter was going to try and play. Delta Charter senior Shyvlie Blaney said she has always loved basketball, and playing this year was special because other schools are not able to.

“It puts everything in perspective,” Blaney said. “You really have to count your blessings every day and this is one of them for me.”

Monterey and Delta Charter have taken temperatures, done contract tracing and quarantined when necessary in order to get the season in, Richard and Ellis said. Typically Monterey would play about 30 games in a season, but this year tournaments were canceled dropping the total number of games to less than 20.

Richard said his team has only had one positive out of a boy’s team with 19 players and a girl’s team with 16 players.  The positive came before Thanksgiving break and the team entered quarantine because they share busses, Richard said.

Once Thanksgiving break ended the community of Monterey was hit hard by COVID Richard said, and the school quarantined for two weeks.

Delta Charter had three or four tournaments canceled Ellis said, and has only played 11 games so far this season.  Ellis said the team has gone into quarantine a couple of times in order to stay safe but the team has not had any positives. Delta Charter senior Tiara Jefferson said she takes the season day by day because of COVID.

“You never know what can happen,” Jefferson said. “One day you can play and the next day you can’t. I just take it day by day.”