No shells to spend as ammunition supplies are low 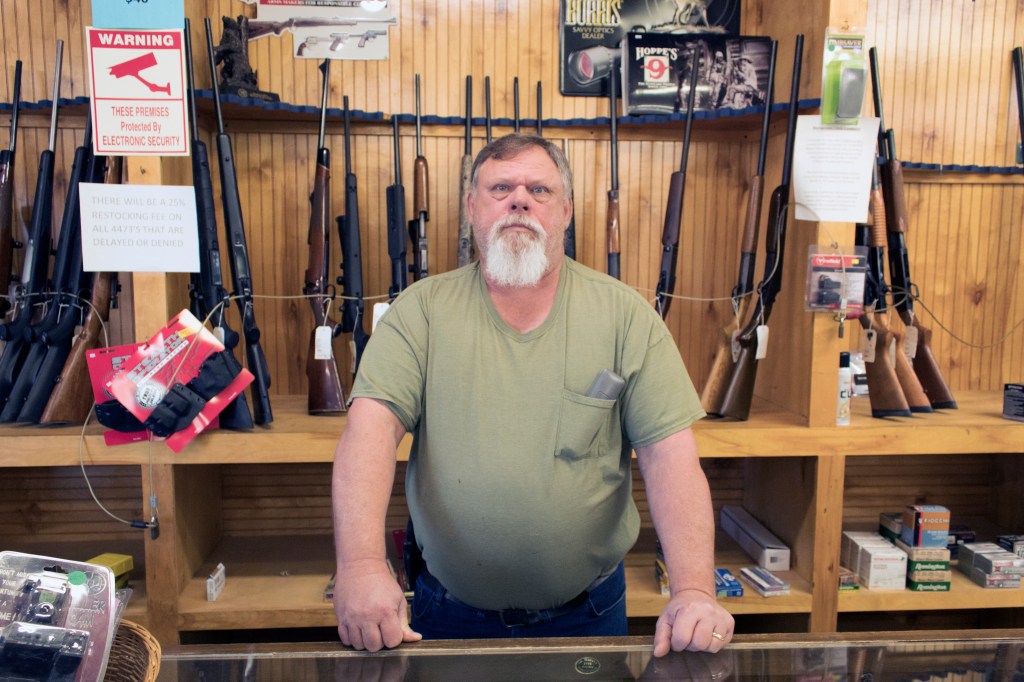 Concordia Pawn and Gun shop employee Joe Reynolds stands in front of a wall of guns and ammunition. Reynolds said most of the ammunition in the store are mostly shotgun shells and obscure pistol rounds. (Hunter Cloud The Natchez Democrat)

Sports Center-Rex Team Sports in Natchez posted a picture of 1,000 rounds of ammunition to Facebook on Wednesday, and within an hour, the inventory was sold-out, gun manager Jason McGehee said.

Empty shelves where ammunition boxes would be is a common sight at any store that sells ammunition in the Miss-Lou area. McGehee said a perfect storm of an election year, and the COVID restrictions on manufacturing and shipping created an ammunition shortage.

“A lot of manufacturers have been half staffed and that has slowed it (production) down,” McGehee said. “There is an issue with transportation getting stuff out. You got an election year, which is always a spike. It is a perfect storm, because it is all coming together into one piece. Then you have a panic, because some people can’t get it, so you start buying more at a time.”

McGehee said he started noticing an ammunition shortage in April or May 2020. The shortage is not just affecting bullet inventory, but it has affected scopes, gun slings and fishing gear inventory, McGehee said.

The ammunition and firearms manufacturer Remington went bankrupt in July 2020 and was bought out by Vista Outdoors. McGehee said Remington and other ammunition companies in the same situation are having trouble playing catch up.

Both Reynolds and McGehee said both hunters and those who shoot for fun are being affected by the ammunition shortage. McGehee said he sees people frustrated that they cannot find ammunition for their guns when they are used to coming in and being able to buy a box.

Sports Center has boxes of pistol ammunition on the floor with people picking them apart. Common caliber rounds such as 9mm .243 .270 .30-06 and .308 are becoming increasingly difficult to find, Reynolds said.

On Reynolds’s store’s shelves are obscure pistol rounds and shotgun shells like other stores in the Miss-Lou area. Guns are on full display but Reynolds said gun sales at the store have slowed with the ammunition shortage.

For example, a phone in Reynolds’ shirt pocket rang as he spoke behind the gun display case. A caller inquired about a youth .243 rifles, but the sale fell through when the caller asked if there was any ammo with it, and there was not.

McGehee said Sports Center is setting aside a box of ammunition for each gun on display for customers to sight in their purchase. McGehee said even then they might not have enough rounds to even use the firearm.

McGehee said those who reload their own ammunition are struggling to find the supplies to reload. Reloading is when a gun owner takes spent bullets and puts the primer, powder and lead back into a bullet. Reynolds said it is hard to find primer and powder to reload those spent shell casings.

“Reloading supplies is very scarce,” Reynolds said. “You have to strike the end of the shell to hit the primer, to ignite the powder to make the gun go bang. If you can’t get the part that, you strike to make it go bang. Then it does not do you any good to have the rest of it.”