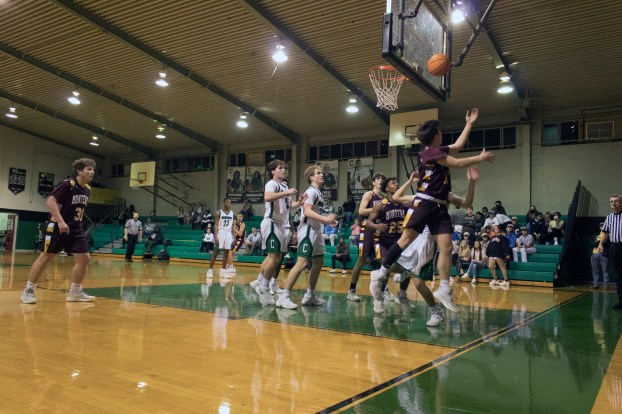 Players scramble for a rebound underneath the goal in Cathedral’s 45-35 win over Monterey. The Green Wave were down 27-11 at halftime. A strong rebounding and shooting second half erased the 16 point deficit as they defeated the Wolves. (Photo by Hunter Cloud | The Natchez Democrat}

The first quarter was competitive on both ends of the court and ended with Monterey holding a 10-7 lead. Then it looked like the Wolves were going to make this game a rout after they outscored Cathedral 17-4 in the second quarter for a 27-11 advantage at the half.

Better reounding and shooting by Cathedral lead to a turnaround for the Green Wave in the second half.

With 5 and a half minutes left in the fourth quarter. Cathedral tied up the game and never looked back.

Monterey fell to 10-3 overall with the loss. The Wolves played host to Avoyelles Charter School for homecoming Friday night. Cathedral (record not available) traveled to Madison to take on Madison-Ridgeland Academy on Saturday.

NATCHEZ — In the first game of the varsity doubleheader between the two teams, the Cathedral High School Lady Green Wave held on for a 31-21 victory over the Monterey High School Lady Wolves.

Neither team was able to pull away from the other in the first three quarters. Cathedral led Monterey 9-5 after one quarter of play and 21-15 at halftime.

Even though the Lady Green Wave did not score a single point in the third quarter, the Lady Wolves were held to four points and still trailed 21-19 by quarter’s end. Cathedral outscored Monterey 10-2 in the decisive fourth quarter.

“That’s what kept us in the game,” Dunbar said. “Still have work to do, but it looks pretty good.”

By  Hunter Cloud The Natchez Democrat Only Delta Charter and Monterey High School are taking the hardwood in Concordia Parish... read more