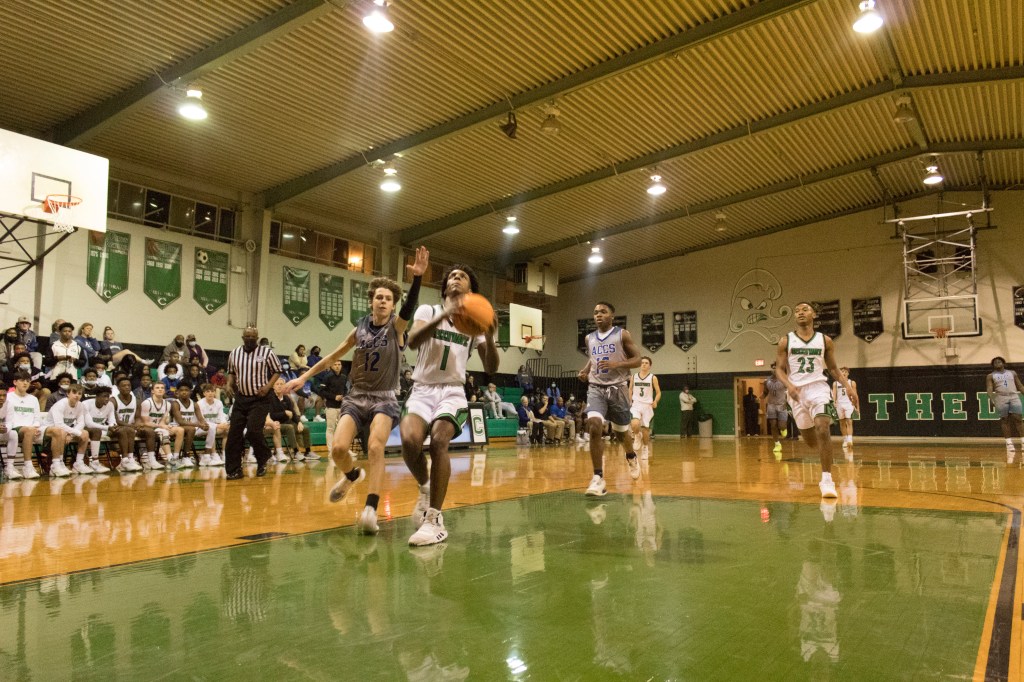 Christian Wright drives the lane on a breakaway opportunity against ACCS for Cathedral. Wright was crucial in the Green Wave's 59-49 win Tuesday Night. (Hunter Cloud The Natchez Democrat)

ACCS head coach Matthew Freeman said the game turned in his team’s favor when he made some changes at halftime.

“We just made some adjustments,” Freeman said. “We had to get up and play some man there and execute.”

ACCS switching the defensive strategy to man slowed down Cathedral in the third quarter and early in the fourth quarter. The adjustment allowed the Rebels to close the gap and come back from a 23-15 deficit at halftime.

Freeman said the Green Wave were able to go on some scoring runs and pull away from his team. Cathedral head coach Taylor Strahan said he recognized the Rebel’s defensive change and he made an adjustment of his own early in the fourth quarter.

“We had some younger guys in, and they didn’t handle the pressure very well, which is normal for younger point guards,” Strahan said. “We put our experienced guys back in to take care of the ball. They just beat them down the court for layups.”

Both Cathedral and ACCS scored 30 plus points each in the second half with a fervent energy. By contrast, the first half started out slow as Cathedral lead 9-7 after one quarter of play, and the second quarter ended 23-15.

Strahan said his team could compete with anyone when they put in the hustle and effort on the court. Cathedral’s energy came from the crowd support as both ACCS and Cathedral’s fans filled the gym.

“They were loud and brought it for both sides,” Strahan said. “Positive energy from the crowd reflects into positive energy on the court.”

Strahan said the Green Wave is better when his guards Christian Wright and Kaden Batieste are clicking. Offensively they were the biggest difference in the game, he said.