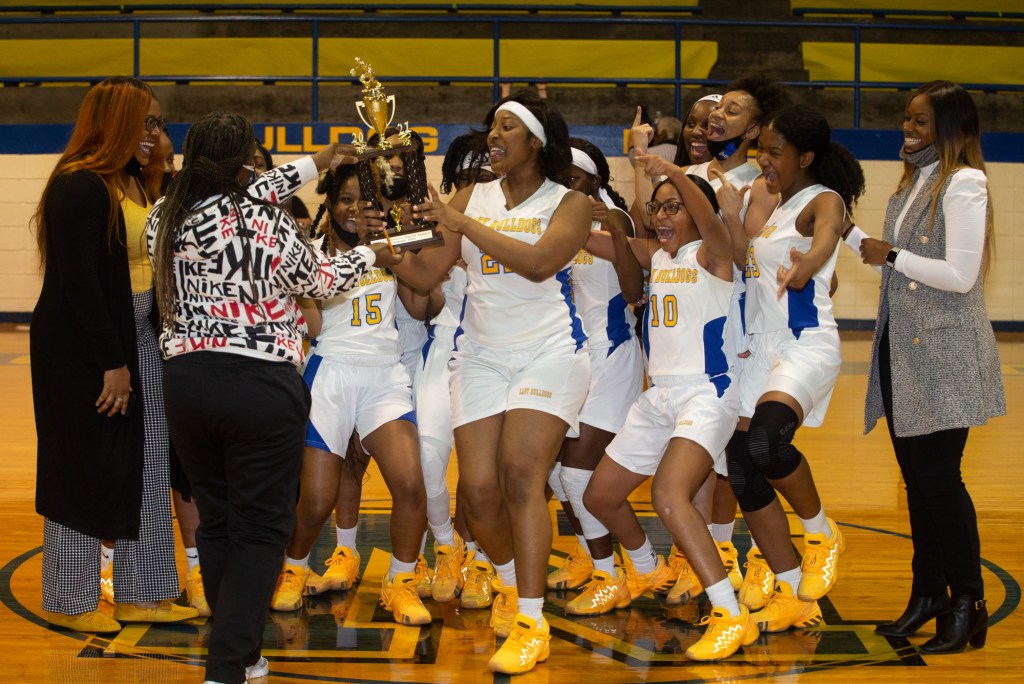 The Lady Bulldogs of Natchez High School celebrate a first place finish in the Region 6-5A tournament. Natchez defeated Forest Hill 51-35 and will receive a bye in the first round of the upcoming playoffs. (Bill Barksdale for The Natchez Democrat)

Head coach Alphaka Moore said her team had put in a lot of work over the summer to get to this point. Her players have stepped up behind a leader like Kelsey McNeal, and put everything towards the season.

“It was a goal that we set in this preseason. To be district champs,”  Moore said. “They really bought in, and they try their best to improve. This is where we are. District champs heading into the state tournament.”

The Bulldogs went 6-0 in 5A Region 6 play and then won two games in their district tournament to secure a district championship.

Moore said sticking to the game plan, and the team working together to play strong defense has helped them go on a winning streak. Natchez’s unbeaten streak is nine games, and the Bulldogs have not lost a game since a defeat in December against South Pike.

The Bulldog’s strengths are speed and defense, Moore said her team picking up their defensive effort has made an impact in those nine games.

Freezing temperatures paired with snow and ice has kept the Bulldogs at home this week. Moore said she is not pushed her girls to get in the gym and practice.

Instead she said her players are watching film at home and trying to prepare for the second round of the State Tournament. She said she did not want her players out on the road in the treacherous conditions.

“As long as I can keep them focused on what we need to do before we can get back in the gym. I think we will be fine,” Moore said. “At this point in the game, free throws and consistency are going to be a major part of our success in the playoffs. A lot of the games are probably going to be pretty close. It is going to be about who can focus on free throws and finishing the game.”

Natchez is not expected to play again until Feb. 24. Moore said they will host the winner of Brookhaven and Gautier.