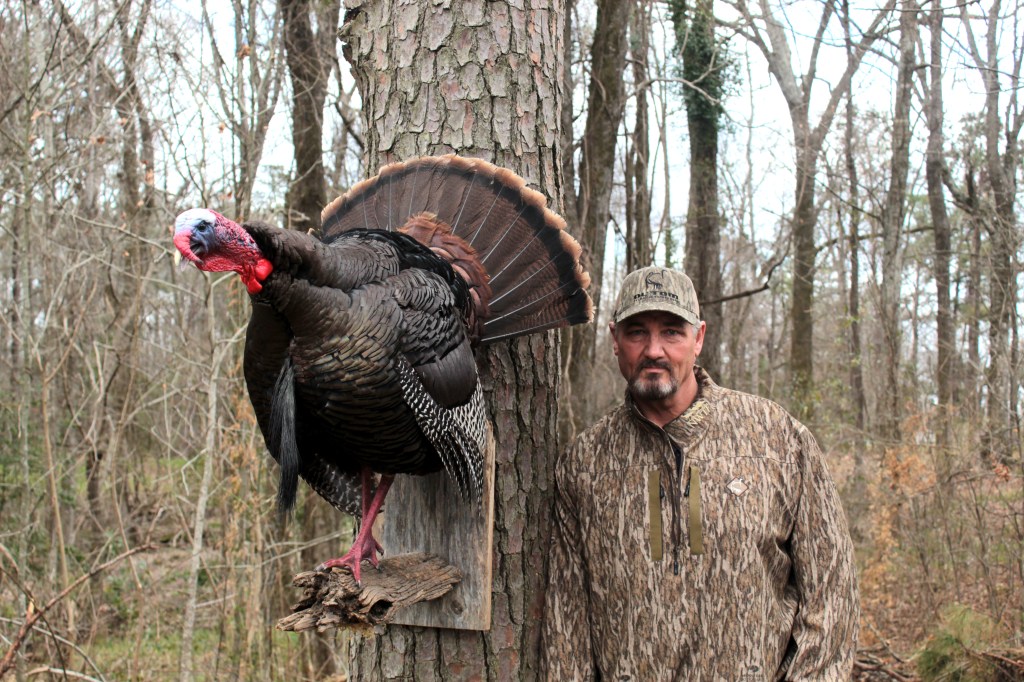 Natchez resident Tucker Crisp stands next to a turkey he has taxidermied for a client of his. He said he has hunted turkeys since he was about 17 years old. Mississippi’s spring turkey season opens March 15. (Hunter Cloud The Natchez Democrat)

Natchez resident Tucker Crisp eats, breaths and dreams of Turkey season each March. He said he first started hunting turkeys with a .410 shotgun when he was 17 with his dad.

A single shot .410 was a great shotgun to start with he said, because the gun did not have any kick to it, in fact he passed the gun down to his son Tyler, who killed his first turkey at the age of nine.

“Turkey hunting is really a traditional sport,” Crisp said. “You want to pass down calls and guns. Before I ever had Tyler I was like ‘I hope one day I have a son that can maybe get his first turkey with this gun,’. Then he graduated to the 20-gauge.”

Crisp’s method of choice is to use a 12-gauge shotgun when hunting turkeys. In Mississippi, it is also legal to harvest a turkey using a bow and arrow. The ideal range for a shooting a turkey is anywhere within 40 yards, he said.

Turkeys begin their day by leaving their roosting sites in trees and fly down onto the ground. The best time to be in your hunting spot in the woods is 30 minutes before daylight, he said. Making a barred owl call before the birds begin to sing he said is a way to get a turkey to gobble at you.

Patience is the most important trait of a turkey hunter, he said. The biggest mistakes a turkey hunter can make is moving from their location, and calling too much, he said.

When calling a turkey, hunters use box calls, slate calls or mouth calls to get their attention. He said it does not matter what you use, if the call doesn’t sound like the bird you are mimicking, you are going to have a difficult time in the woods. He said a hunter should record their calls with their phone in the woods to see how good it actually is.

Wild Turkeys move constantly, he said. The National Wild Turkey Federation’s fact sheet said turkeys can run up to 25 miles an hour and they can also fly up to 100 yards.

On average, a turkey is 40 inches tall and can easily be lost behind trees, Crisp said, and they can easily sneak up on you. If an inexperienced hunter sees what he thinks is a turkey and it is not moving, it most likely is not a turkey, he said.

While domesticated turkeys have a reputation for being dumb, he said they actually catch on to what is going on in their environment. Turkeys also have eyesight which picks up on movement and silhouettes.

“If you can kill a turkey around here, you can kill one anywhere,” Crisp said. “They are the hardest (to kill here) because of the pressure. They catch on quick. The more they are hunted. The harder they are to get.”

The rougher the terrain the rougher the turkey hunting will be, he said. In southwest Mississippi where there are hills, he said it is important to pick a big tree so the turkey cannot see a silhouette move with a shotgun.

Most importantly, he said a hunter has to have confidence while in the woods.

As he gets older, he finds turkey hunting to be more than just killing the bird.

“It is now more about getting to go, enjoying it, and to go with people,” Crisp said. “That is one thing about turkey hunting. You can go with a buddy, or your son.”