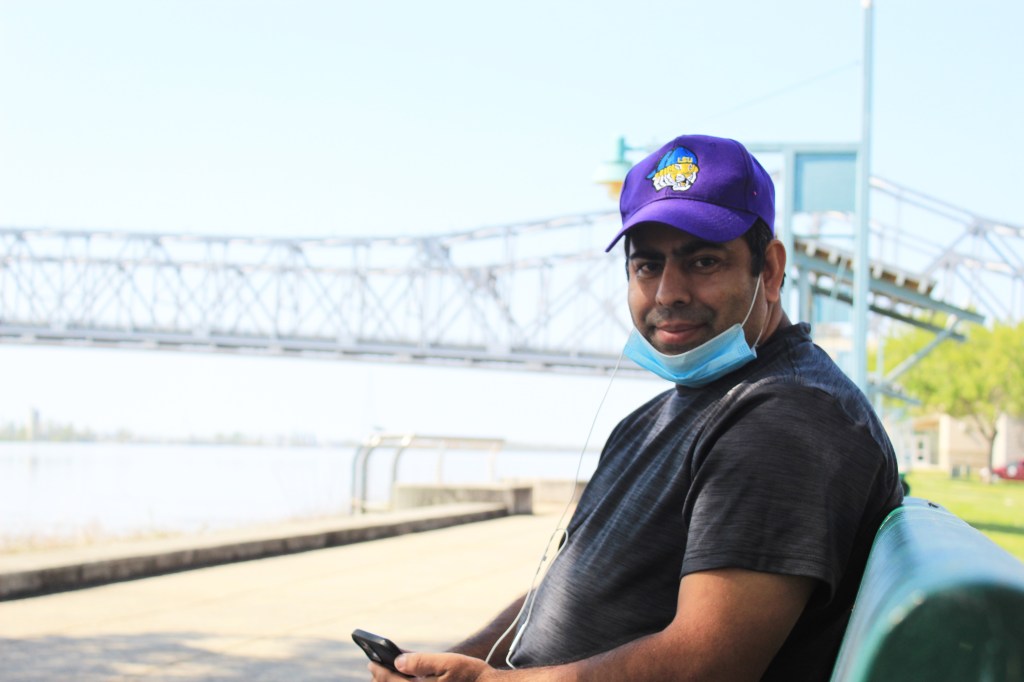 Muhammad Nazir sits on a bench along the Vidalia Riverfront by the Riverfront hospital close to where the dart landed on Friday morning. Nazir lives in Cottonport, Louisiana but is at the hospital for his brother's back surgery. (Hunter Cloud The Natchez Democrat)

Muhammad Nazir sat beneath the shade of an oak tree on a bench looking out at the Mississippi River by the RiverPark Medical Center in Vidalia, close to where the Dart landed Friday.

His younger brother was in the hospital for back surgery after flipping his truck during the ice storm, he said. The last time his brother had a surgery it was too cold for him to be outside by the river. Seeing the warm weather and clear blue skies, he decided to sit by the river, he said.

Wearing a purple LSU hat, he held his iPhone with earbuds in his ears. He called his wife back home in Cottonport, Louisiana, which is close to Marksville, he said.

“I called my wife and showed her the river,” Nazir said. “I showed her what the border between Louisiana and Mississippi looks like.”

Originally, from Pakistan, Nazir moved to Lake Charles, Louisiana, in 2002 at the age of 17 with his family. He joined his father, who came over in 1988, he said. Every few years or so he goes back out to Pakistan to visit family.

He said his junior and senior year of high school was an adjustment because of the difference in language. After graduating from high school, Nazir went to Louisiana State University of Alexandria and studied criminal justice for three years, he said.

His older brother had open-heart surgery at 26 and died. Nazir decided to take over his brother’s gas station, he said. His parents and siblings live together in Cottonport. It was their dream to buy a house and live close to each other in the countryside, he said.

Living in Louisiana reminds him of his home in the northern mountains of Pakistan. He said the countryside is peaceful, quiet and he loves country living.