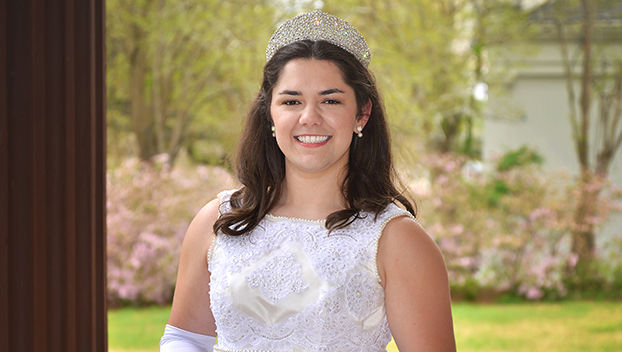 The 2021 queen of the Natchez Garden Club Royal Court said she is excited to represent Spring Pilgrimage with her family by her side.

Emily Hootsell is the daughter of Finley and Regina Hootsell and granddaughter of the late Walton and Daisy Hootsell of Natchez and Lloyd Legendre Sr. and late Mary Jean Legendre of River Ridge, Louisiana.

She is a 2017 graduate of Cathedral High School and attends Mississippi College in Clinton. She is pursuing her bachelor’s degree in biological sciences with a minor in business administration with the goal of going to medical school.

Not only is Hootsell the crowned queen of the 2021 NGC court, but she is also joined on the court with her younger brother Griffin, who is a royal general this year.

Their father, Finley, was a court member in the 1980s. As queen, Hootsell said she will be wearing her mother’s wedding dress with alterations done by Jackie Wallace, of Lafayette.

“The thing I’m most excited about is having my family involved,” Hootsell said. “It’s a very exciting feeling. I have gotten to watch past kings and queens and it’s an honor to represent the Natchez Garden Club in this way.”

Hootsell’s dress is made of classic white satin and has an empire waist and scoop neckline. It is sleeveless, with an A-line silhouette skirt. The bodice is appliqued and trimmed in Alencon corded lace.

The skirt also has lace and trim overlay culminating in a detachable 10-foot train with the same Alencon scalloped lace, applique and accents.

Griffin and Emily Hootsell are not new to Natchez Spring Pilgrimage and the annual Natchez Garden Club Tableaux, in which the children of the garden club members entertain audiences with scenes from Natchez’s history and the royal court is presented.

Natchez Garden Club President Donna Sessions said the performance at the Natchez City Auditorium would be slightly different this year.

Those who are familiar with the Historic Natchez Tableaux will see the same stories they know and love with the polka and maypole dances, “just told a little bit differently,” Sessions said.

The revamped version of the Spring Pilgrimage event, which has been renamed “Stories Along the Mississippi,” will be a slightly shorter program that starts with the raising of the American flag and concludes with a presentation of military cadets and their dates for the royal ball, Sessions said.

Shows tickets are $15 each for adults and $10 for children.

The opening show started at 7:30 p.m. Friday at the Natchez City Auditorium at 207 Jefferson Street with more shows starting at 7:30 p.m. Saturday, April 3 and April 9, 10 and 16. Due to COVID-19, Centers for Disease Control and Prevention guidelines will be followed and masks are required, Sessions said.

Hootsell said the show is important to her because it helps the garden club raise money for historic preservation of the houses on tour during Spring Pilgrimage.

“They work hard to preserve the integrity of historic houses like Magnolia Hall and the House on Ellicott Hill. This event serves as a fundraiser for that,” she said.

Hootsell has participated in the Natchez Garden Club Tableaux since 2009, when she was 10 years old.  Her roles have included Virginia Reel, Showboat, Polka and she has been a royal maid on the 2019 and 2020 court.

Hootsell said her favorite role was dancing the polka because it’s an elegant performance. Hootsell also enjoyed talking to tourists from the crowd and greeting new people from all over the world, she said.

More information and tickets are available at natchezgardenclub.org.