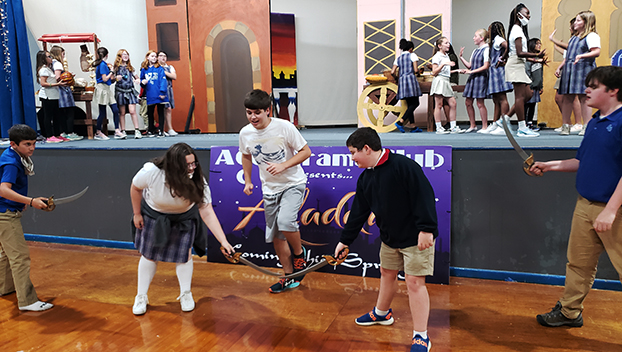 At center, Lane Rehms, Adams County Christian School senior playing Aladdin, dodges sword attacks from Mattie Barrett and Westin Alexander, both sixth-graders at ACCS, during a rehearsal for “Aladdin” on Monday in the school gymnasium. (Sabrina Robertson / The Natchez Democrat)

NATCHEZ — This weekend, Adams County Christian School Drama Club students will finally draw back the curtains for “Aladdin,” a play that has been in the making for more than a year.

Students began working on the play last school year but were never able to perform it in front of a live audience due to COVID-19.

Because seniors who were cast for the original production graduated, some students had to start learning the play from scratch after it was recast for this school year.

“I was originally supposed to be the Magic Carpet until this year after the recast I was cast as Jasmine,” said Ella Boyd, who is a junior at ACCS.

Boyd and her co-stars — Lane Rehms, a senior who is playing Aladdin, and Addison Smith, an eighth-grader playing the Genie — are all filling lead roles for the first time in their performing careers, they said.

“It’s very nerve-racking but exciting,” Smith said of finally being able to perform in front of a live audience on Saturday.

Rehms said he didn’t originally audition to be in the ACCS Drama Club. He was approached by ACCS’s theatre director Malori Giannaris about performing in a supporting role for “Frozen” two years ago and has been a part of the club ever since, he said.

“I was completely willing to do it, of course,” he said of performing in Frozen. “I auditioned for Aladdin and ended up with a lead role.”

Tickets can be bought at the door or in advance at any ACCS office.

VIP seats are $25 each, general floor seating is $18, stadium seating is $10 and student tickets from any school are $7 each.

“The best way to support our program and the arts in our community is by buying a ticket and coming out to support these students who have worked tirelessly for two years on this production,” Giannaris said.

Other lead roles in this performance include Dylan Brocato as Jafar, Ruby Mooney as Iago, Emma Smith as the Magic Carpet, Jenna Holland as Abu and Lace Dossett as the Sultan.