LJ Minor gets final at bat in Natchez win 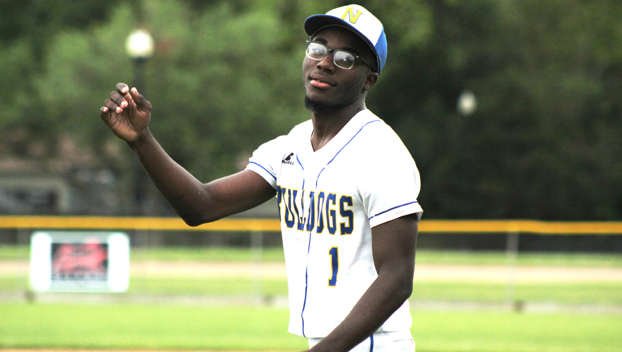 LJ Minor dances on the field prior to his last at bat as a Bulldog. Minor tore his ACL and missed his senior year for Natchez. He said he was nervous when he stepped to the plate Thursday night, Natchez beat Franklin County 4-3. (Hunter Cloud The Natchez Democrat)

Natchez baseball player LJ Minor said he missed most of his senior season with a torn ACL.

He stepped into the batter’s box one final time as a Bulldog Thursday night. Natchez went on to beat Franklin County 4-3.

“It was a surprise. I thought I was just going to do senior stuff and leave,” Minor said. “My big surprise was getting a chance to bat before the season was over. God does things for a reason, but it was devastating (not being able to play). I am happy as long as I can support (the team).”

“I was nervous. I couldn’t stop moving and shaking because I was so nervous,” Minor said. “I felt like I was starting all over again, trying out for high school. I was nervous because I thought everyone’s eyes were on me.”

Head Coach Dan Smith said he sent him up to the plate with directions.

“I told him not to swing, but I knew he would,” Smith said. “It was too much like him to swing.”

Minor swung away at the plate and struck out rather than just standing there to take a walk. He said if he did not swing it would have been boring. After the third called strike, Smith met Minor with a hug and his teammates ran out to hug him.

LJ’s younger brother Trylon Minor swapped jerseys with him, so LJ’s No. 1 uniform was on the field the rest of the night. LJ said he loves his brother, and it makes him happy to see his brother wear his uniform on the field because it makes it look like he is playing.

Trylon said he felt like he had to fill in for his brother because LJ was injured so he wore his uniform. He said Smith texted him ‘you have to come through for your brother.’ He said he played hard for his brother with two hits in the game.

Natchez’s bench yelled “Shoot him Try, shoot him,” as Trylon fired in a bullet to home plate gunning down the Franklin County lead runner to end the inning; and that was the difference in the one-run game.

“I saw him come around third and I said ‘I got this guy. I got him.’ So I came up and threw and I got him. I trusted myself.” Trylon said.

Natchez has three more games to play before the playoffs.

“It ain’t over. The season is not over,” Trylon said. “We still got a long way to go. We are going to keep going, keep working every day and get better.”