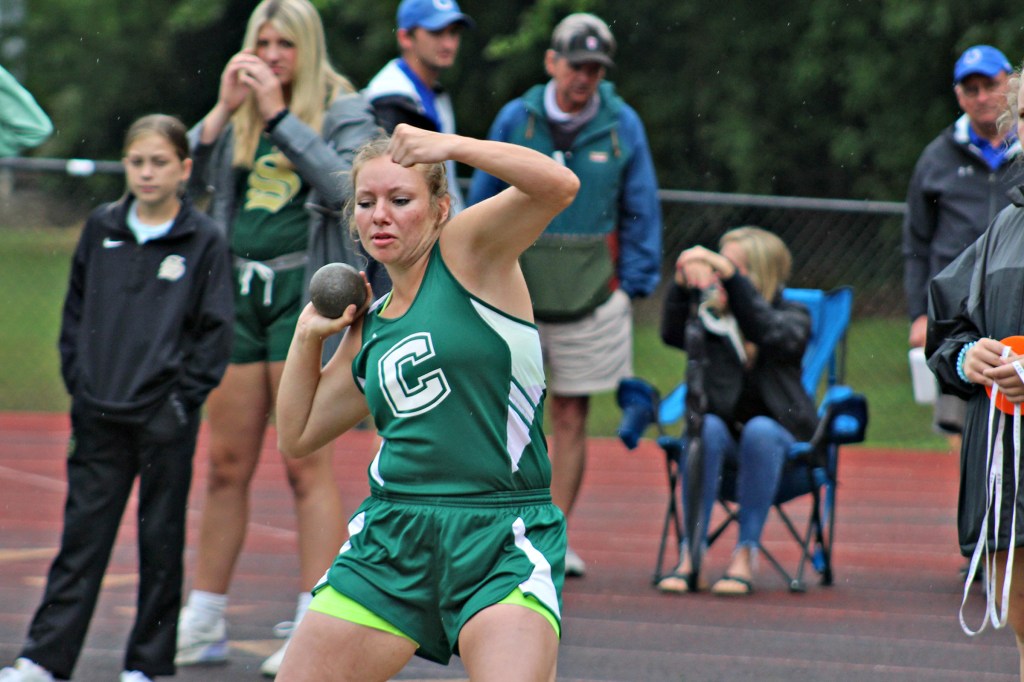 Allie Feltus put on a show on Friday as Cathedral’s thrower took first place in both shot put and discus at the 2021 MAIS 4A girls state championships.

Winning the state championship was a moment she had worked towards over the last six years. She was the lone Lady Green Wave competing in field events on Friday.

“I can feel when a shot is right. That first throw is what got me state. It felt good,” Feltus said. “I was the only representative from Cathedral there. Having that on your shoulders, and representing first place in both. That is the best feeling.”

She first started throwing by mirroring head coach Tommy Smith in seventh grade. Smith threw left-handed and asked her to do the same motion but on the right side. YouTube was the coach for the rest of the season before volunteer coach Kevin Campbell started working with her.

He said the first time he saw Feltus threw, she was already pretty decent at throwing. Throwers do not always have a foundation to start with and you have to rebuild, he said. It was her hard work and dedication, which made her a state champion.

She said the first thing Campbell told her was she was not blessed with height, so she had to have good technique to compete. Her throwing abilities are in disguise because she does not look like a typical thrower, she said.

Feltus said she came in second place as a sophomore in the throwing events at the state championships. She lost by six inches on the last throw and had led the event up until that point. COVID canceling a season and coming in second was on her mind this season, she said.

She wanted the state championship so bad and was throwing at 9 p.m. by car light last Wednesday ahead of the state meet. Campbell said Natchez High School allows him on his time to help other kids. Teaching is his passion as he is a teacher, coach and pastor, he said

Feltus is attending Piedmont University in Demorest, Georgia next year to throw for their track program. The track program won a conference championship this week, she said. She would study Forensic Sciences or Sports Communications.

Piedmont’s throwing coach reminded her of Kevin, and the track team was so loving it felt like home, she said. Campbell said when he coaches kids he thinks of them as his own. He is proud to see Feltus have an opportunity to compete at the next level.

“I’m as proud of her as I could be to see her get to go live her dream,” Campbell said. “To see all of the hard work, sweat, blood and tears are coming to fruition. She is going to get the opportunity to throw in college, and who knows how far it can go from there. I am so proud, so proud.”

Skates ran his 800-meter race in 2 minutes and 10.38 seconds to finish fourth. He also ran the mile in 4 minutes and 54.95 seconds to come in second place. Fellow distance runner Burget finished the two-mile race in 10 minutes and 47.55 seconds to take second place. Heritage Academy’s Sidney Stegall beat both Skates and Burget in the races by about 20 seconds.

Jones finished in fifth place in the long jump with a distance of 20 feet and three and a half inches.