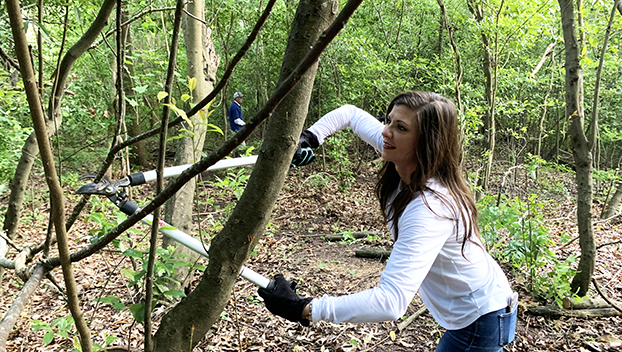 Natchez Ford, 2J ranch and the City of Natchez will help with the project. The projected time to finish the project is six months, said Wade Heatherly of the Kiwanis Club.

The trail system fell into disrepair and is hidden to even long-time residents of Natchez, Natchez-Trace Kiwanis Club President Jackie Robinson said.

The entrance is close to a parking lot by an old train engine and a closed pool behind Auburn.

“It is a long-forgotten trail, and we have done everything we need to do to rehab (the trail),” Robinson said. “Once we get the trail rehabbed and ready to bike again, the city has agreed to continue the maintenance. It will be put back on their maintenance contract so it won’t fall into disarray again.”

She said they wanted to do something special for the Natchez-Trace Kiwanis Club’s 80th anniversary. This project will give back to the community of Natchez. One of their members suggested improving the mountain bike trail that was started in 1998. She said after COVID, it was important to create an outdoor space where everyone can enjoy it.

Alderwoman Valencia Hall of Ward said the project is an astronomical improvement to Duncan Park and fits right in with other improvements to parks in Natchez. She is the chairwoman of the city’s Recreational renewal task force and thanked the Kiwanis club for their generosity.

Members of the Natchez Bicycle club are helping lead volunteers down the trails, which blend with the forest floor. There is a map of the trail system on a sign at the entrance, but it is faded out. Natchez Ford President Brad Yarbrough is replacing the rotted wooden deck leading to the trail with a gravel walkway, she said.

“Right now, we are going to stay on the main trail and clear out the existing trail,” Robinson said. “We are going to make it to where you can see it is a trail again. We want to incorporate some fun things for bikers and hikers too.”