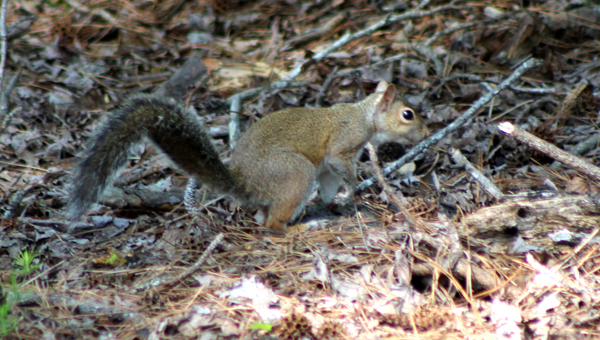 Spring squirrel hunting season starts May 15 and lasts just 17 days with a bag limit of 4. (Hunter Cloud The Natchez Democrat)

Water shakes off green leaves as squirrels dart across branches. A green canopy and sprawling foliage limits the visibility for both hunter and hunted. Spring squirrel season is a week from opening.

Spring squirrel season lasts 17 days from May 15 to June 1 with a daily limit of four squirrels. MDWFP has a shorter season and half the bag limit in the spring than the fall because the department wanted to be conservative in their approach when they brought the season back in 2014. He said he is not sure how long the state went without a spring season before 2014.

“We are starting out a little conservative with it not knowing what kind of harvest we might get,” Hamrick said. “Most of the young squirrels from the winter period are pretty well weaned by the time we got the (spring season) in place. We are pretty confident it is not having too much of a detrimental effect. It is probably less detrimental compared to the late winter (fall season).”

Squirrel hunting in the spring is also different because squirrels have a different diet than they do in the late fall hunting season. Stores of acorns, nuts and seeds have likely germinated by the time the season begins, he said.

He said squirrels carrying around seeds, nuts and acorns contribute to the planting and regrowth of forests, he said. Young trees grow and produce buds, which can be a food source for the squirrels.

Insects, young tree bark, buds, fruits and grubs contribute to the diet of squirrels in the spring months. Hamrick said the spring season is referred to as a mulberry season in some states because the squirrels like to eat mulberries. Keying in on food sources is still important for the spring hunt as it is for the fall squirrel hunt.

“They have a pretty diverse diet for them being seedeaters,” Hamrick said. “They usually utilize a wide variety of food. Gardeners will know that when they start snagging tomatoes…They are a little more opportunistic than folks kind of think of them being.”

After spring squirrel season ends, hunters can hunt frogs, raccoons, and nuisance animals in the three months before dove season opens. He said there are a few reasons for why the season begins May 15 and ends June 1.

Harvest data shows that the springtime is considerably lower in squirrels harvested than fall data, he said. This data is collected through phone surveys and surveys hunters complete when they check out of a Wildlife Management Area such as Sandy Creek.

“In Mississippi, not a lot of people are going to want to get out (and hunt) in June. The weather gets kind of nasty for hunting around that time,” Hamrick said. “Squirrel dog hunters are probably more interested in that time to work their dogs. We give them a little more of an opportunity to get out. They can have more time to keep their dogs in shape and working on squirrels.”