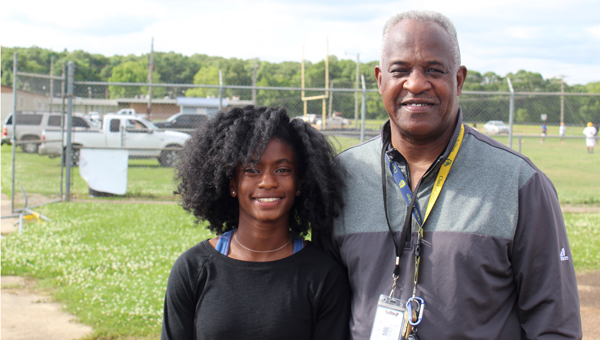 Nyla Poole sprinted out of her car to the Natchez High School track. She loves to run, Natchez track coach Larry Wesley said.

Wesley had asked Poole to come out to track this season, and the sophomore agreed to run. Her first race was a practice meet, and her coach put her in a 1600-meter race and an 800-meter race.

She won both to establish her race as the 800-meter. Before then, seventh grade was her last time to run track, she said. Her mindset about running is to compete from start to finish.

Before she became a Bulldog this year, Poole was a Vidalia Viking. Her approach to events like the state meet is to shake out all the jitters and get past the nerves. She said she is calm on the track.

She said running is a mental hurdle, so she tries to get in the right headspace and focus on what she needs to do. The 800-meter race is the hardest race to run.

“It is the most thoughtful race,” Poole said. “You have to assess everything. You assess your start, getting good positioning during that first lap. Once you finish your first lap, you are trying to find out if you have more to give. It is a lot of thinking going on in this race.”

During the 800, Poole has to pay attention to what her opponents are doing and counter their moves. The race is one long thought process, she said.

In track, runners have a kick — meaning their final sprint to the finish.– Each runner has a different kick distance, and her optimal distance is the final 200 meters of a race. Even the kick takes some strategy because she can not let other runners leave her.

“I can’t let the people who I’m running with leave me,” Poole said. “If I see them kicking on before (200 meters). I’m definitely going to stay with them. As far as the full sprint, I sprint the curve and then the straight. Most of them burn out because they don’t have a full sprint. I have an advantage in that because I enjoy sprinting.”

Her final kick was her advantage in Cross Country, she said. It was how she caught girls at the end of the race, and it is the way she snuck into the State meet.

She said the girl had counted places and saw she was going to qualify. When she slowed up, Poole caught her.

“She pulled up right before the line, and I was like ‘I’m taking this,’” Poole said. “You have to be on the go at all times. I’m very competitive. I don’t let anybody take my spot. I would be paying attention to that, and she didn’t.”

In the final stretch for Poole, the simple phrase “catch her,” is on her mind. She said at South State, a girl said “excuse me,” as she passed her. Poole started chasing her.

“I had never heard that in my life. The amount of disrespect,” Poole said. “I was chasing her and the other girl slowed up, which is how I qualified. Had there been another 10 meters, I was chasing that girl. My mind is just like ‘whoever is there, I’m going for you.’ If I can catch you, I’m going to catch you.”