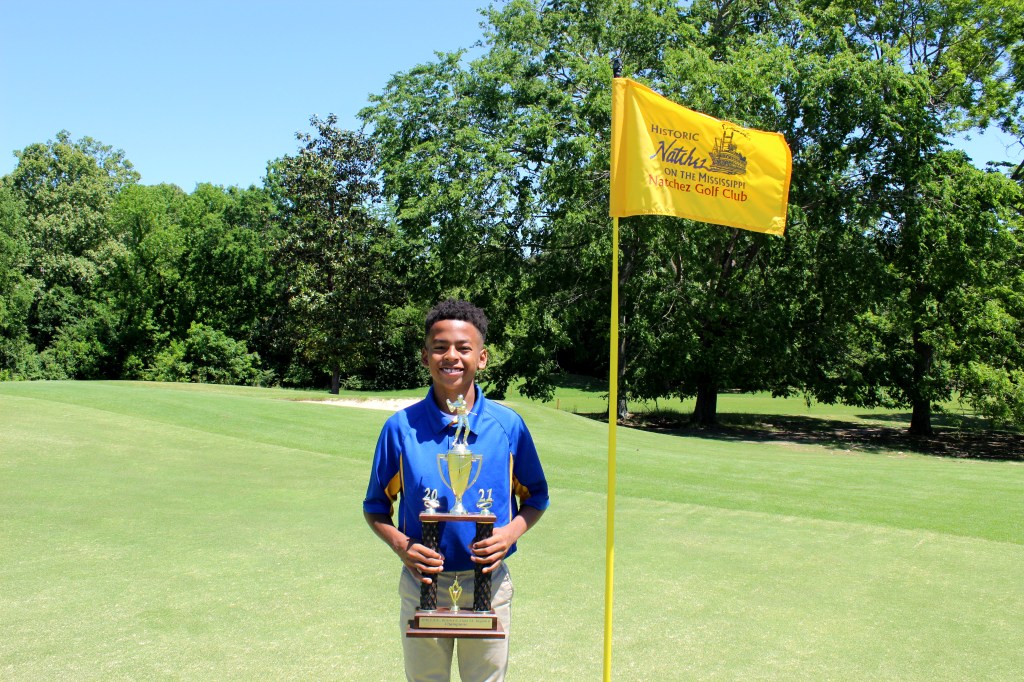 Daylen Haywood holds the district trophy as he won the championship in a sudden death playoff two weeks ago. (Hunter Cloud The Natchez Democrat)

Haywood went on to beat Thomas in a sudden-death playoff hole to win the district championship.

Two weeks later, Thomas wants revenge for what was an unfortunate break. His coach Richard Bellar said his tee shot went into some trees on the second hole of a sudden-death playoff.

Thomas got out of trouble by firing his second shot right at the green. Walking to the green, he realized he hit the front lip of the bunker. The sand trap cost him the district championship as he came in second place.

“I got to see Daylen every day bragging about it,” Thomas said. “He keeps saying he beat me, even though I’m better than him. It is always going to be in my memory. How I could have done better.”

Haywood is the son of Natchez Boys Basketball head coach David Haywood. He said golf helps him focus, and it is supposed to help him focus in basketball near the end of the game. His dad encouraged him to try and play golf.

He said playing against a teammate in a sudden-death playoff is like playing anybody else. When you are no longer playing as a team, it is everyone for themselves, he said.

“We are still friends at the end of the day, but when we are on the golf course or the basketball court, we are going at it,” Haywood said.

Thomas walked over to the bunker with a six iron and tried to recreate the moment he lost the tournament. His first shot out of the bunker was perfect Thursday. Haywood said, “That is what you should have done,” from the green.

Thomas is a senior at Natchez High School and is considering his options for college. He could go to the University of Mississippi or Xavier University of Louisiana in New Orleans.

He said he may continue to play golf, especially with his teammate Daylen. The game of golf has connected him to new people, like his new boss at Sears. He showed his golf clubs to Thomas. He said golf connects him with people like basketball has.

“Without basketball or sports, I would probably be more anti-social,” Thomas said. “I wouldn’t have as many people to talk to or people I know. Golf has already connected me with so many people.”