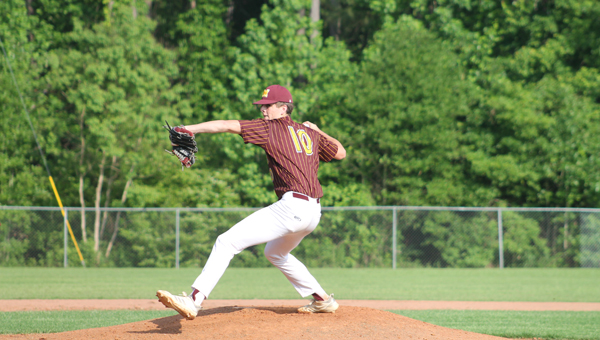 Ethan Clark will start the semifinal game against No. 1 seed Choudrant in the semi-final round scheduled for Tuesday. The Wolves are a No. 20 seed. (Submitted Photo)

SULPHUR— Monterey reached the semi-finals of the LHSAA Class B playoffs with a 1-0 win over Pitkin last Friday. No. 20 seed Wolves will play No. 1 seed Choudrant in Sulphur at 2 p.m. Tuesday afternoon.

The semi-final matchup is a winner take all game. Louisiana plays one-game series in Class B. Monterey has been to the semi-final round two other times before this. Monday night was filled with pizza for the Monterey baseball team as they relaxed in their hotel. It takes 19 pizzas to feed 19 players,  Head Coach Eric Richard said.

He said their playoff run represents the community of Monterey. He said Monterey has always supported their athletic teams, but there is a little extra pride in the community.

“We were the No. 20 seed, the underdog. I think everyone can relate to our team,” Richard said. “They saw how this team has grown throughout the year. How they have improved and come together at the right time. They are playing their best baseball.”

Just a No. 20 seed, Monterey’s underdog run has been led by ace Ethan Clark putting the team on his back from the pitching mound. After the win against Pitkin, Clark bear-hugged Richard in front of the dugout.

Richard said every kid on the team shared a special moment with him. Clark led the basketball team in the playoffs and he has done the same this baseball season.

“That boy has had a great year. Academically and athletically in basketball and baseball,” Richard said. “We have been as good as he has been. He has pretty much put the team on his back. We have grown around him too. Everyone has grown around him.”

Clark will start the game against No. 1 Choudrant, he said. At this point in the season, the seeding of teams does not mean anything. He said every team the Wolves play are tough. If the numbers did matter, Monterey would have been out of the playoffs a long time ago, he said.

Monterey’s approach to playing their games is to go out and play their best baseball regardless of their opponents. Monterey’s first playoff round was against a No. 13 seed Mt. Hermon, followed by wins over No. 4 Zwolle and No. 12 Pitkin.

“These kids really don’t know they are not supposed to be here right now,” Richard said. “We will go out and keep the same approach we have. We will look at the scoreboard, and see what it says at the end of the seventh inning.”