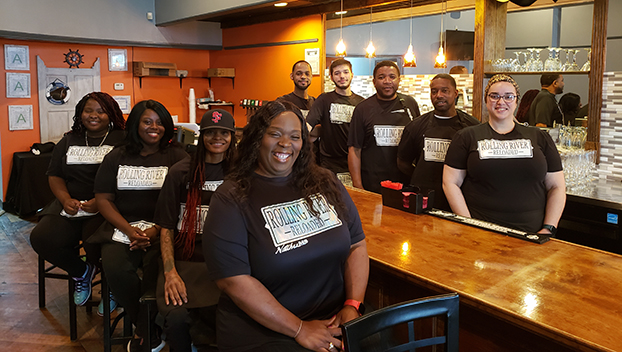 NATCHEZ — The former Rolling River Bistro has been revamped by a new owner in recent months.

Robbie Cade-Furdge and her husband, Maurice Furdge, closed on the restaurant in October 2020 and have rebranded it as Rolling River Reloaded.

The restaurant celebrates its grand opening in June.

However, the restaurant and event venue is open now Wednesdays and Thursdays from 11 a.m. until 10 p.m. and some weekends when the space has not been rented for wedding receptions and other special events.

The building is split with a place to sit and eat and a bar area and a separate room that can be used by groups for special occasions.

Furdge said what was meant to be a soft opening for the restaurant wound up being “explosive.”

“We were originally just going to do take out for a while but people started coming in and sitting down and we started serving them,” she said. “The food is good and the service is amazing. … People like coming here because it feels like home.”

Furdge said homelike hospitality is partly due to the restaurant staffers being made to feel like a part of one big family, whether they are biologically related or not.

Robbie is a 1997 honors graduate of Ferriday High School and calls Natchez home.

She and her family now live in Ripley, located in northeast Mississippi, and are making the transition back to Natchez.

Furdge serves as the associate pastor and community outreach director of Word of Faith Ambassadors Worship Center, which is one church with three locations in Natchez, Ferriday and North Texas.

The church is pastored by her biological and spiritual parents, Bishop Robert and Betty Cade.

She most recently was appointed by the City of Natchez to serve on the Natchez Convention Promotion Commission, the managing board of Visit Natchez established by state legislature.

Rolling River Reloaded plans were conceived when Furdge and her husband took a tour with Chesney Doyle, President of Friends of the Riverfront Natchez, in 2019.

“We were doing a cultural, historical opportunity tour and brought in several investors from my network to look at different properties they could invest in here in Natchez. Little did I know that my husband and I would end up making an investment here,” Furdge said. “With me being a native of Natchez, I’ve always wanted to do something in my hometown.”

Furdge said she honed her skills at planning and coordinating group tasks to put together a team of friends who all oversee the business of the restaurant part-time.

She consulted with her friend Jarita Frazier-King, who owns Natchez-Heritage School of Cooking, and Rene Adams, the former chef of Rolling River Bistro.

Former Taste of Chicago owner Paul Lewis is now acting as a chef and manager of Rolling River Reloaded with Janice Solano, who formerly managed The Castle restaurant at Dunleith, acting as assistant manager.

Head chef Roslyn Minor whips up a menu of dishes Furdge calls “simply southern” with a bit of the classics like fried porkchop chicken and catfish, shrimp and barbeque ribs as well as some creative options like deep-fried mac and cheese balls and — Minor’s specialty — the “Soul Roll.”

The Soul Roll is a twist on an egg roll made with a whole dinner of baked chicken, mustard greens and candied yams used as the filling.

Furdge said Minor has “endless” choices of egg roll that inspired her to keep the word “rolling” in Rolling River’s title. Also like the river, the restaurant’s menu will be fluid with new choices added that will keep the locals coming back, she said.

Now that COVID-19 restrictions have loosened up, many have also seized the opportunity to use the restaurant’s event space.

Already, the event space is booked through October, so those with a special day in mind will want to call at least two to four weeks in advance, Furdge said.