Kidney donor stops in Natchez on 1,500-mile bicycle ride for cause 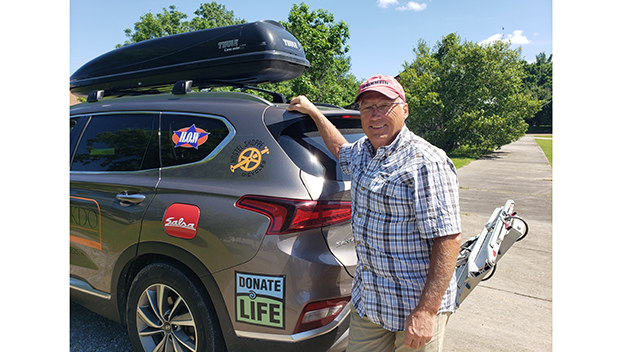 NATCHEZ — Mark Scotch, a native of Madison Wisconsin, passed through Natchez on his bicycle last week on a mission to save lives and spread awareness about organ donations.

On April 24, Scotch started a 1,500-mile ride from his home in Madison on his way to Natchitoches, Louisiana, and passed through Natchez Friday to raise awareness for the cause. Scotch also invited other riders to join him for any distance they feel comfortable with, including cyclists in Natchez.

With rest stops, he plans to conclude his journey by May 17.

About one year ago, Scotch said he was traveling through Natchitoches, Louisiana, and met a man sitting just a couple barstools away from him at a microbrewery.

“I had never thought about organ donation,” he said. “At the age of 64, I raced in my 20th or so xc-ski ultra-marathon. I’ve also long-distance biked, finishing in over a few dozen 100 plus mile Winter Fat and mountain bike races over the past 10 to 12 years.”

Scotch and the man at the bar, Hugh Smith, struck up a conversation and Scotch learned that Smith was undergoing a nightly dialysis session at home.

“The next thing you know he was telling me about his need for a kidney. He was at Stage 5 renal failure and on dialysis for 10 hours every night. Without even thinking I told him ‘if you need a kidney, I’ll give you one of mine.’ After my commitment to give Hugh a kidney, I started to educate myself on kidney donations.”

In his research, Scotch said he learned that approximately 13 people in America die every single day for lack of a needed kidney transplant.

One out of 750 people are born with only one kidney and live normal lives. Only three out of every 1,000 deceased donors have usable organs, he said.

He also learned of the National Kidney Registry, a group that facilitates living donor transplants by matching up those in need with prospective donors.

As it would turn out, Smith would receive another kidney from a better match through the National Kidney Registry and the kidney that Scotch gave went to save the life of another person in New York who remains anonymous.

“Not everyone can be a living donor, but everybody can (register to) be a deceased donor. They can just sign up on their driver’s license and that is what everyone should do. There is no reason not to. And everyone can learn a bit about the topic and share it with other people. That is what we’re trying to do with The Organ Trail,” Scotch said. “The ride is about sharing what my wife Lynn and I have learned about the need for living donors and how to become one.”