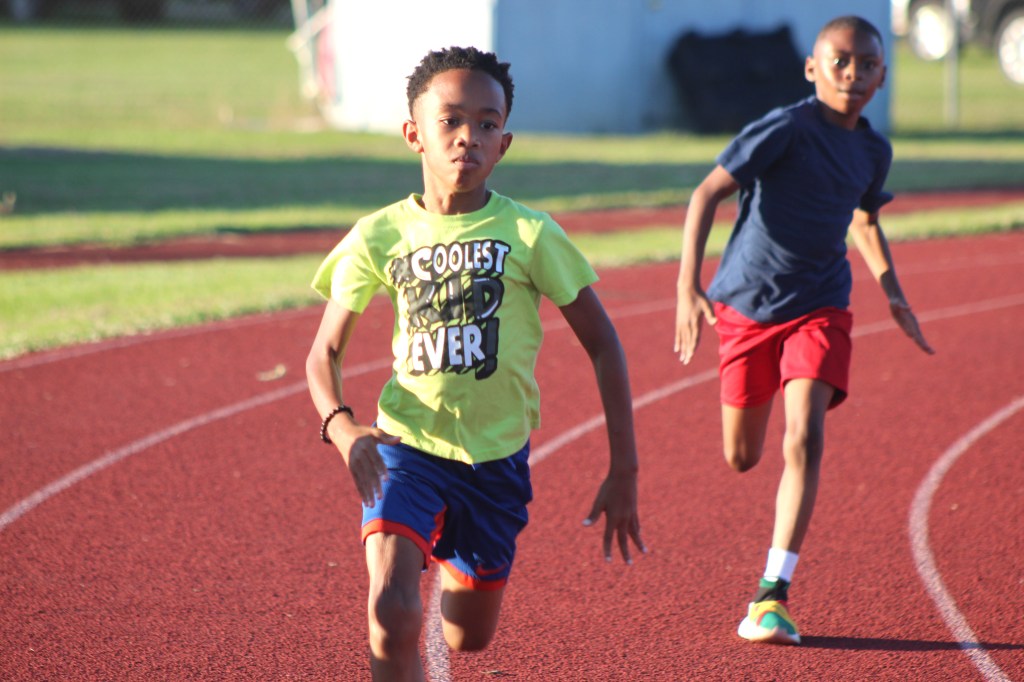 Logahn Johnson runs around the track, he is eight years old. (Hunter Cloud The Natchez Democrat)

NATCHEZ — Raising an Alliance of Discerning Leaders Track Club meets Monday through Thursday to run at Natchez High School. The club is where Maur’ziyah Bass, Charve Gibson, Darrian Washington and Logahn Johnson and other kids can run.

Some of the kids are as young as three or four and some are 18 and in high school. Bass started running when she was 4. She just turned 8, she said.

“I like to have fun,” Bass said. “(The other kids) push me (to be better) a little bit. I like running with people.”

Kids run in practice from 6 p.m. to 8 p.m. Head Coach of the track club Eddie Ray Jackson said all kids have opportunities to participate in meets.

Runners 12 years old and under compete in three events, and kids over the age of 12 compete in four events. The track program is more than running. “It is a way to bridge communities,” he said.

Gibson is in her first year with the club. She said she has made friends in Natchez and her family got her into running.

“I run with my cousins a lot, then my mom put me in track,” Gibson said. “I enjoy it. I think it’s fun. I find the competition fun.”

Jumper Darrian Washington is from Natchez originally but has lived in Petal since third grade. Since seventh grade, he has spent his summers running with the track club in Natchez.

“If I keep working end push myself (I can reach those goals). I can’t come out here and play. I’m focusing as much as I can,” Washington said. “(The schools interested in me are) Hinds Community college and Adams State in Colorado. I’m trying to get another offer in-state. I would like to stay closer to home and family.”

Washington runs because it is a stress reliever, and he fell in love with it.

“When you in the middle of the completion, everything melts away. You let go of any stress you have,” Washington said. “I fell in love with it. When I run, my head is really clear. I imagine myself in the front of the pack or keeping up and just moving.”

Johnson is eight years old and in his first year running. He said he has made a lot of friends through the program. He is from Fayette so the drive to Natchez takes about 25 minutes.

He runs with a focused look and a smile. His lime green shirt said, “Coolest kid ever,” as he sprints around a curve. Running and baseball are two passions of his, he said.

Professional excited to play in home state in Natchez…