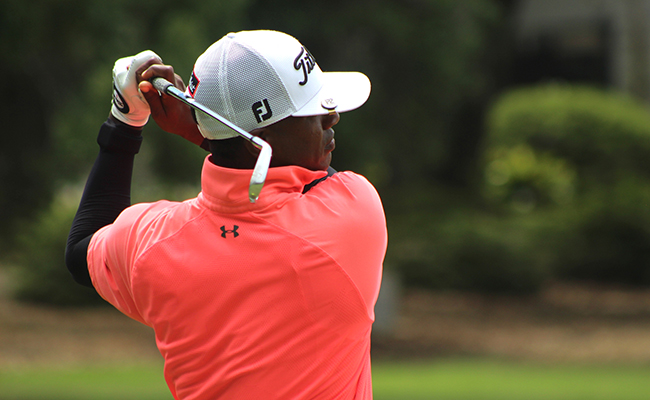 Golfers Montrele Wells and Karim Muhammad hit golf balls side by side on the Duncan Park driving range Thursday before The Natchez Open.

Both play on the Advocates Pro Golf Association tour, are friends and yet have different paths to playing golf.

Muhammad is a native of Macon, Georgia and grew up playing golf. He said he saw Tiger Woods play golf at the age of nine, a family friend put on a golf clinic, and within minutes, he fell in love with the game. His family was not a golf family but supported him anyway.

Wells is from Columbia, South Carolina and ran track in high school. He said he did not have a favorite golfer growing up because he did not play golf until college. He went to Benedict College in Columbia to stay closer to his grandfather to take care of him.

“I went to college on a track scholarship. The track coach got fired so they did not honor my track scholarship, and I had no way to pay for college,” Wells said. “I was in search of finding a way to pay for college. Growing up in the projects, there was a program called fairway outreach. I took part in it when I was 12. I remembered that and saw the golf team was having tryouts, so I decided to go for it.”

In his tryout, he embarrassed himself, but the athletic director at Benedict College felt sorry for what happened, he said. The golf coach allowed him to practice on the college course and try out again in a year.

Every day for a year, he was on the golf course from sun up to sun down except when he had classes. At night, he would shine his vehicle’s headlights on the green to work on his short game. “There was nothing that was going to stop me. I still have that mentality to this day,” he said.

A year later, he made the team and won a national minority championship. By his senior year, he was named the team captain.

“I never thought I would fall in love with this game,” Wells said. “Now it is the only thing I think of. I eat, sleep and dream golf. One day I dream of playing on the PGA tour and being the number one player on tour.”

He said the only thing hold him back is having a sponsorship. Luckily, Wells works a full-time job as a caddie TPC Sawgrass and can support his family.

In 2012, he became a professional golfer, he said. Last year was rough because he had a car wreck, and he hurt his knee. This year has been a comeback year, and he has tried to find his way around the golf course again.

“Fortunately for me, when I do not succeed, it lights my fire, and I keep pushing,” Wells said. “There have been times where I wanted to give up, and it’s been tough, but for some reason, I just feel this is where God wants me. Every time I feel like throwing in the towel, he gives me a reason not to.”

Muhammad is the young buck amongst a friend group with Wells and Nick Wade. They all play together on the APGA tour, he said.

He played golf at Lemoyne-Owen College in Memphis before playing professionally. He said the jump from college golf to pro golf was easier due to Wade and Wells teaching him the “tricks of the trade.”

“It is cool (being the young buck). I get to learn a lot. I played golf in college, and when I turned pro, it was a step on faith,” Muhammad said. “I have guys who can support me and help me learn. At this level, golf is a team thing because we are all trying to get to the PGA tour. Everyone is trying to help everyone get there.”