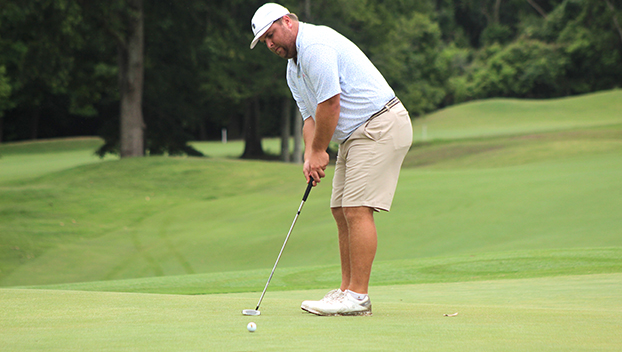 Matt Lorenz finished his first round of professional golf on Friday at the Duncan Park Golf Course in Natchez. He is playing against 95 other golfers in The Natchez Open. (Hunter Cloud The Natchez Democrat)

Former Southern Miss golfer Matt Lorenz, who had a fifth year at USM due to COVID, made his professional debut in The Natchez Open Friday morning.

Lorenz’s group was the first to tee off, and they finished their round in 2 hours and 58 minutes. His first professional start included a hot streak where he made three birdies in a row at the end of the round.

“I was one-over-par for a while and missing some putts. Just to make a couple near the end of the round and have some momentum going into tomorrow (is a highlight),” Lorenz said. “I always know if I hit my driver good, it is my bread and butter, I will do well. Today, I knew if I kept it in play, I would be fine. There were no nerves at all.”

He said his professional tournament went good but there was room for improvement after shooting 2-under par with a 69.

Carla Brown looked on as her son Eric Brown teed off on the first hole. The Browns are from Lake Charles, Louisiana, and it is their first time to come to Natchez in probably 20 years, Carla said. They had come before to visit and made the return for the golf tournament.

“We follow him everywhere he goes,” Brown said. “Usually, I caddie for him. I’m not today. Usually, caddies ride in the cart, but today it’s only the players riding, and I’m not sure I can make 18 holes walking.”

She used to play golf until her son started playing, and then she started caddying for him. As Eric drove off down the cart path, she followed walking and observing her son play the first round.

“I love golf, so it’s just very interesting for me,” She said. “I don’t give him any advice. I’m just there to give him his clubs, rake the bunkers, that sort of thing.”

Playing partners Adolph Hayes, Bertram Small and Roy Baase each missed the green on the 9th hole, a par 3, Hayes and Baase chipped onto the green and made their putts to par. Baase is a resident of Hattiesburg and had Southern Miss covers on his driver and woods. Hayes is a Natchez resident, and Small is originally from Vidalia but lives in Atlanta now.

Small chipped from a bunker in the fairway and hit the top shelf of the green, which left him with a 20-foot putt to save par. His putt then rolled down the hill about four feet past the hole. He sank his second putt for a bogey. Hayes said it had been a rough start to the tournament for the group.

The Natchez Open will play the second round Saturday and the final round on Sunday. The public is welcome to come out to the course and there will be free beverages around the golf course for fans.

Duncan Park Golf Superintendent and Tournament director Greg Brooking said fans are welcome to walk along with the players and watch them play.