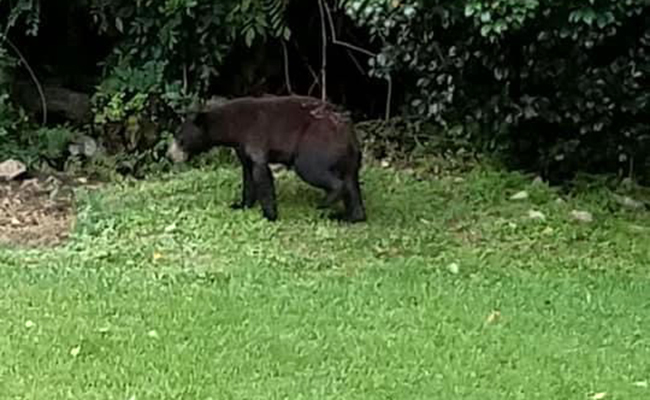 This black bear was seen in Natchez on Merrill Street. Blaine Lee posted the photo to Facebook after his neighbor sent him the photo. Black bears could be seen in Natchez because of their natural movement and will not stay in the area. (submitted photo)

Eva Dunkley said she saw bears in her yard eating around her hedges. She lives on Bluebird Drive and saw the bears around 11:15 a.m.

Natchez resident Blaine Lee posted on Facebook that he saw a black bear on Merrill Street Sunday afternoon. He posted a photo of the bear he said was taken in his neighbor’s backyard.

According to the Mississippi Department of Wildlife, Fisheries and Parks, another sighting was reported on St. Catherine Street and Martin Luther King Boulevard Monday morning.

Natchez Mayor Dan Gibson confirmed the sightings and said he has been in touch with the MDWFP. He said it is not the first time a black bear has been seen in Natchez and it will not be the last.

“We have forests, and forests do attract wildlife,” Gibson said. “We have sightings all the time of deer, possums, raccoons, and yes, black bears. The good thing is black bears are scared of humans.”

Adams and Wilkinson counties’ black bear population has been growing over the years, said Bob Strader, former St. Catherine Creek Wildlife Refuge Manager. There had not been any sightings at St. Catherine Creek, he said. He retired seven years ago.

“They are pretty secretive,” Strader said. “They are a wild animal, and their defense mechanism is to hide. There used to be a hunting season for them in Mississippi and Louisiana too. You start getting shot at, and you get pretty secretive too.”

Black bears are now protected in Mississippi and Louisiana. It is illegal and discouraged to shoot a black bear.

Cubs are born in January and stay with their mom for about 16 months. Female cubs grow up and stay in the same area, but male cubs are often kicked out of an area by their moms and older males, Strader said.

These yearling males are displaced and have to find a different territory. MDWFP’s Black Bear Program Leader Richard Rummel said the department typically gets more calls this time of the year about sightings. Young male bears are moving and a bear’s breeding season begins in July, so males move even more. Adams County is a perfect habitat for bears because of the dense forests and creeks.

“They use those wooded creeks as travel corridors,” Rummel said. “We know there are bears. There are a lot of woods along the river. It never surprises me for them to be in town.”

According to the Mississippi Department of Wildlife Fisheries and Parks, Black bears are typically secretive and not normally aggressive towards humans. Black bear attacks in general are very rare.

Humans can create dangerous situations by feeding the bears. Giving bears food allows them to associate humans with food, and it can cause them to demand food. The best thing for people to do with bears is leave them alone.

“If you see one in your driveway, don’t corner it,” Strader said. “Under any circumstances, it is more than likely not going to hurt you. It can scare you because it is going to have to escape where it is caught up. In an area where there is only one way out, you do not need to be on its way out. It is going to get out of there. The chances of a black bear hurting you are pretty slim.”

Mississippi Department of Wildlife Fisheries and Parks asks those who have an issue with black bears or want to report a sighting to please contact MDWFP at (601) 432-2199.

For more information about black bears visit the MDWFP website and go to the black bear program page, or visit bearwise.org.