Natchez — On Tuesday, the Natchez Police Department arrested a man who had a gun in his possession that had been reported stolen during a recent rash of automobile burglaries.

According to a news release from NPD, officers went to the house of D’vonte Leonard, 26, to serve a warrant for the Mississippi Department of Corrections on Tuesday morning when they found the reportedly stolen Glock 19 Gen 4 .9 mm gun at the house at 38 Purnell St. 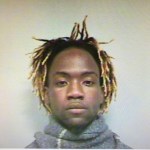 In light of the recent rash of vehicle burglaries, Natchez Police Chief Joseph Daughtry asks that residents lock their vehicles and not leave valuables or weapons visible inside them.

Anyone who has information on any of the recent burglaries in the Natchez area should contact the Natchez Police Department or Crime Stoppers at 1-888-442-5001 to report anonymously.