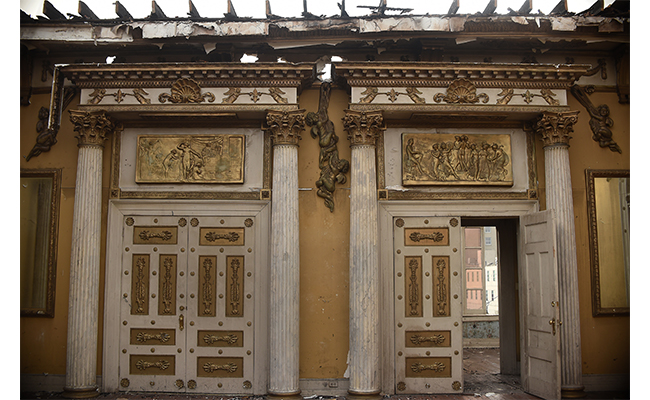 The view from the second floor of the Prentiss Club building after the fire that occurred on September 2, 2018 in Natchez. (File photo | The Natchez Democrat)

NATCHEZ — The Natchez Mayor and Board of Aldermen have been asked to consider supporting a tax incentive for the development of several Natchez bluff properties, including the historic Prentiss Club building at 211 N. Pearl St. and the historic train depot on Broadway Street.

Chris Gouras of Gouras & Associates, a financial advisor representing the property developers and local film producers Tate Talyor and John Norris, asked the board to support a resolution Tuesday adopting a Tax Increment Financing bond worth up to $2.5 million for the project.

This debt would be repaid with a portion of the new sales and property tax revenue generated by the developed property, Gouras said.

The incentive includes five properties, including the former Smoot’s Grocery and Blues Lounge and a small building adjacent to it, the depot and adjacent bluff property, and the Prentiss Club building, which could be turned into a hotel, Gouras said. The Historic Natchez Foundation has been preserving the privately-owned Prentiss Club since it burned in a fire in 2018.

Norris and Taylor would make a private investment of approximately $15 million to develop the properties, Gouras said. They are currently leasing the depot building from the City of Natchez, which is being renovated into an upscale restaurant and small outdoor amphitheater with public restrooms.

“At the end of the day, these incentives will go a long way to help jumpstart this project,” Gouras said.

The Natchez Mayor and Board of Aldermen is required to host a public hearing regarding the TIF bond before it can be approved. The board voted unanimously Tuesday to take the measure under advisement.

However, Natchez Mayor Dan Gibson said the board should not delay the project for long. In a lease agreement approved in April, the board gave Taylor and Norris six months to complete renovations and open the depot.

“Time is of the essence,” he said. “We do not want the city to be the cause of a delay.”