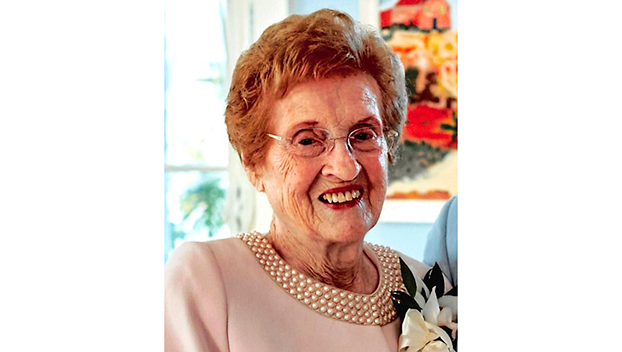 Florence Elizabeth Record Stout passed away peacefully on Tuesday, June 8th in Baton Rouge, LA. She was born on July 24th, 1922 at the family home, Breezy Hill Farm, in Clinton, LA. She attended Bellhaven College in Jackson, MS, where she met the love of her life Gene Morgan Stout who was attending Mississippi College.

They were married August 3, 1943, at Breezy Hill. Following WWII, Liz and Gene settled in Baton Rouge where she began to establish their lifelong home of 70 plus years. Liz was a woman of unmovable faith and a longtime member of Ingleside United Methodist Church. She was active in the Baton Rouge Chapter of the Daughters of the American Revolution. She and Gene were original members of Harlequins Dance Club where many lifelong friendships were formed. Other active memberships included the Feliciana Forestry Association and the Exxon Annuitants Club. Liz was a mother extraordinaire and took on many roles during her children’s upbringing including Camp Fire and Cub Scout Leader, PTA, Pep Squad and Band Boosters, Swim Team Mom, ZTA Mothers Club, and mentor and cheerleader for too many to name. She truly found her soul mate in Gene.

During their 74 years of marriage, they shared a mutual love of music, dancing, camping, fishing, and entertaining for a long list of family and friends. Liz was an accomplished cook and seamstress who taught and inspired so many to carry on these wonderful life skills. Liz had the gift of forming bonds and friendships that lasted a lifetime.

The family wishes to extend our sincere thanks to Liz’s caregivers who have attended her with warmth and devotion. Gratitude as well to Dr. Landon Rousel, At Home Healthcare, Hospice specialties of LA., The incomparable staff of Griswold Homecare, and everyone at Williamsburg Senior Living. Special heartfelt gratitude goes to Ms. Nashuna Powell for her many years of Companionship and tireless attention to our mother and father. In lieu of flowers please make donations to Ingleside United Methodist Church, 4264 Capitol Heights Ave., Baton Rouge, LA. 70806.