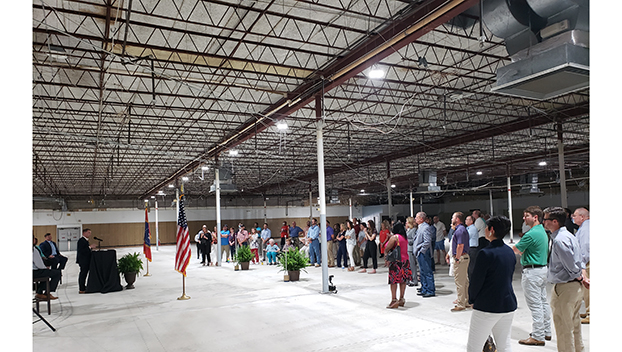 People of Natchez and Vidalia gather to hear the announcement of the Southern Designs and Gifts expansion to the former K-Mart building in Natchez on Wednesday. (Sabrina Robertson | The Natchez Democrat)

NATCHEZ — Now that the former Kmart in Natchez on John R. Junkin Drive — which has been empty since the closing of the store in 2016 — has a new occupant, there are a lot plans in store for the property, Southern Designs and Gifts CEO Tance Hughes said.

While the building itself would house a portion of the home décor company’s manufacturing and shipping operations, the plan is to have the property outside the building open for public use, he said.

“We are having the plans finalized now to put two or three buildings out front,” he said, adding the additions would be added in phases as other business come on board with leasing the space.

Hughes said they would break ground on the first building in August, which would house two new businesses. The first confirmed tenant is a new PJ’s Coffee, which is part of a New Orleans-based chain of retail coffeehouses. The identity of the second tenant cannot be released while their plans are still being finalized, Hughes said.

“Our goal is to open the first building by the end of the year,” he said. “Hopefully, we’ll be able to do the rest of that property. We’re looking for tenants willing to locate there before we build it out.”

Hughes said the property would have a New Orleans French Quarter theme similar to the buildings in downtown Natchez where people can shop and socialize that would be called “The Quarter.”

“It’s going to be a nice, attractive development that will enhance that center by the Mexican restaurant and Natchez Market,” he said. “You can fit as many as six to eight different businesses in that area.”

Hughes said Southern Designs and Gifts plans to be operational in the K-Mart building by the first of August and would continue doing business at their Vidalia location. The company would employ as many as 30 new people over the next two years, he said.

New job openings are advertised at southerndesigns.net and on social media.