Rebels use 7v7 to stay fit, have fun in offseason 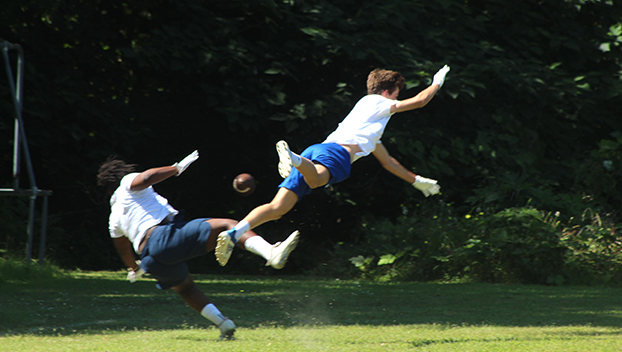 Adams County Christian defender JJ Clairborne, left, and receiver Samuel Merriett fall to the ground after a mid-air collision in hopes of catching the football in a 7v7 drill Thursday. (Hunter Cloud The Natchez Democrat)

NATCHEZ — Most high school football teams have already begun taking part on 7-on-7 games this month to get ready for the upcoming 2021 football season while one will wait until later this summer.

Adams County Christian School head coach David King said that his team has already played in a couple of 7-on-7 games and plans on doing several more. One of those games took place last Tuesday night at Madison-Ridgeland Academy.

“Personally, I detest 7-on-7. But everybody does them so I don’t want my kids to get left out,” King said. “In my old school opinions, there are bad habits that come with 7-on-7. Getting in shape and having fun doing it – those are the only benefits to it in my old school opinion. They can lead to very bad habits and false security. Bottom line is if you can’t block and you can’t rush the passer, you can’t win. Without that 6-4, 270-pound defensive end coming in after you to knock your teeth out, you can throw the ball all day. But the kids like it. If it’s going to get them in shape and compete against other guys and have fun doing it, I’ll do one a week until mid-July.”

When asked how they improve their game and knowledge of football, King said, “Honestly, you get to working on your passing game and your timing with your receivers. Conditioning and competing are the two things you can get from 7-on-7, but I have yet to see a quarterback get busted from behind from a mad defensive end on a 7-on-7.”

On Tuesday, ACCS played in six 7-on-7 games at MRA and King said his players were on the field for three straight hours. He added that his kids like it because of the conditioning and competition that comes with these kinds of games. He also said he believes the games are overrated, but “We do some here and there.”

The Rebels worked on quickness and strength for three weeks of summer workouts before taking part in their first 7-on-7 games and that they will start throwing the ball later on in June.

“In my opinion, you don’t get a real indicator until the kids start falling off,” King said when asked how a coach can get an indicator on how the team will do during the summer. “I hear stories that the kids don’t make workouts. Our kids enjoy the summer workouts. We try to make it as fun as possible.”

King said that his coaching staff works hard at making each workout a different workout and does different things.

“The more you can change it up for teenagers, the better,” King said. “We do that a lot. Keeping everything fresh. Changing up drills. Mixing in a 7-on-7 is good.”