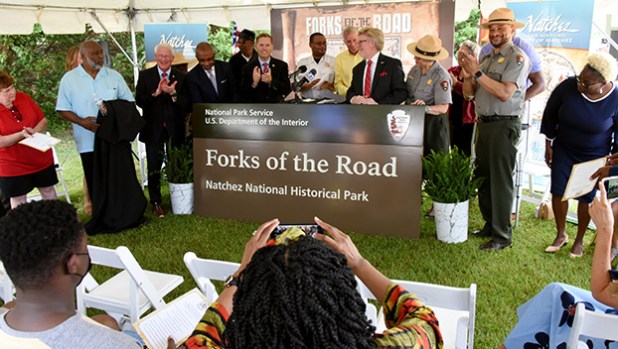 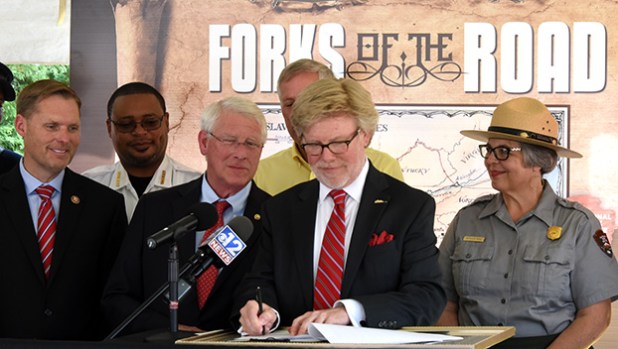 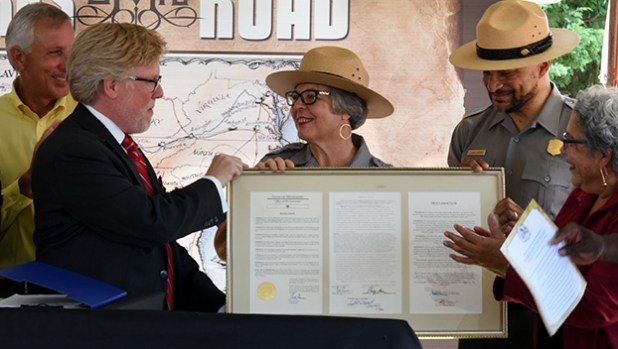 Natchez Mayor Dan Gibson hands framed resolutions to Kathleen Bond, superintendent of the Natchez National Historic Park, at a Juneteenth ceremony in 2021, official handing over city-owned land for the new Forks of the Road National Park. (File | The Natchez Democrat) 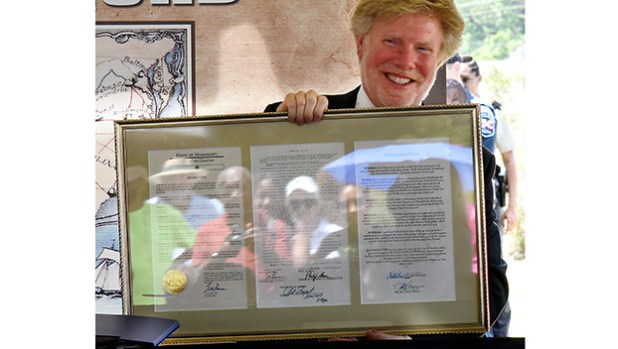 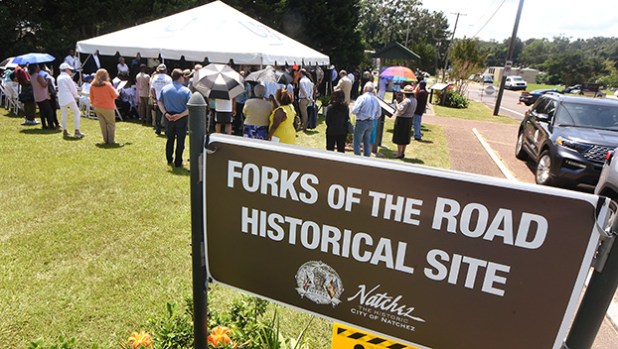 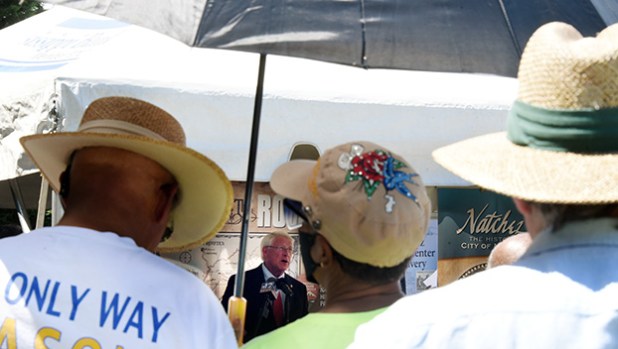 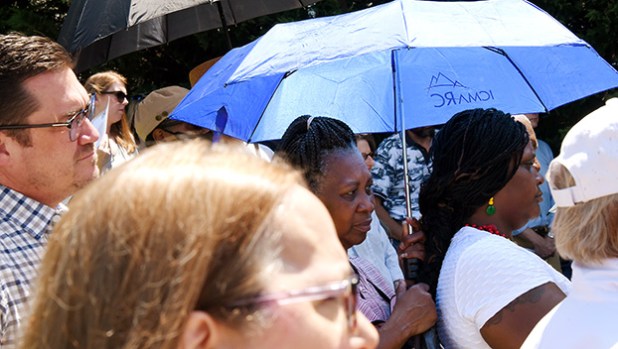 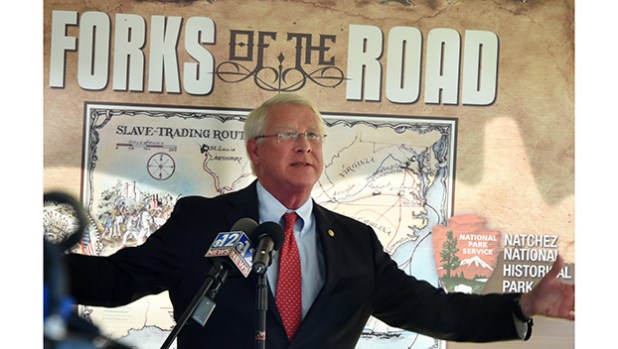 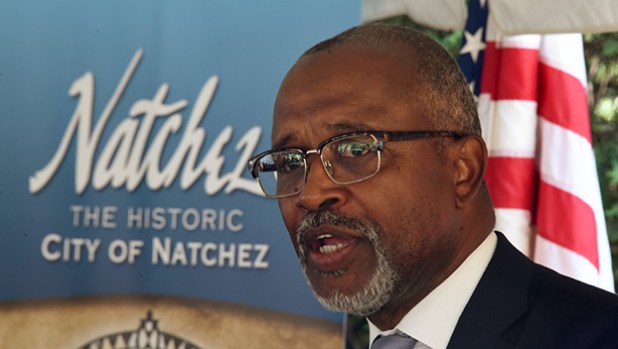 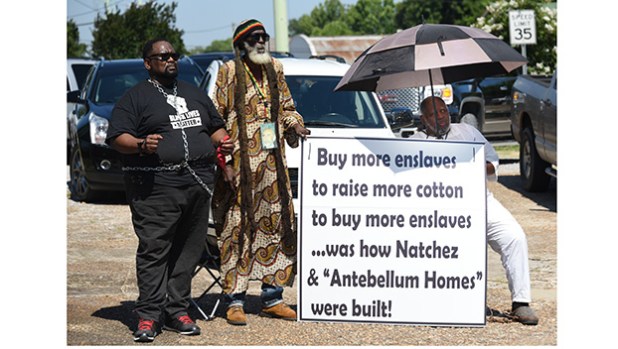 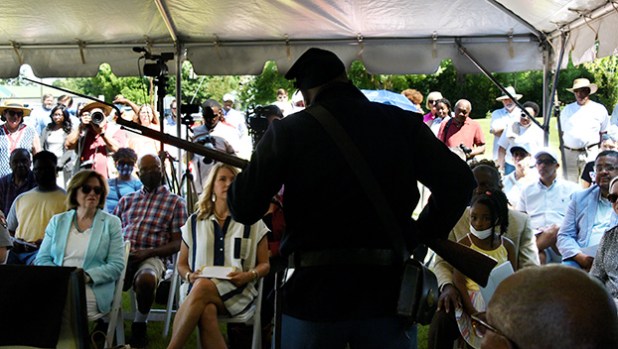 NATCHEZ — Friday was a historic day for the City of Natchez and the National Park Service as deeds to city-owned parcels of land at Forks of the Road were conveyed to NPS.

The land, located at Liberty Road between St. Catherine and East Franklin streets, was once the location of the second largest slave market in the nation.

“It is not a history to be proud of but it is something that needs to be acknowledged,” Natchez Mayor Dan Gibson said.

Wicker said it was no mistake that — after several years of local, state and federal officials working to do so — the day of conveying the land to NPS falls just one day after U.S. President Joe Biden proclaimed Juneteenth to be a national holiday and just one day before the holiday itself on June 19.

“The Great Seal (of the United States) has said since 1787 and still says today, ‘e pluribus unum’ (out of many, one people). E pluribus unum came hard for the United States of America. It has had to be worked for and fought for. … That is why it is so important that we be here at this moment at Forks of the Road,” Wicker said.

Juneteenth celebrates the anniversary of June 19, 1865, when Union Major General Gordon Granger stood at the corners of Strand Street and 22nd Street in Galveston, Texas, and read General Order No. 3 proclaiming all enslaved people of Texas to be free.

This reading came nearly three years after President Abraham Lincoln issued the Emancipation Proclamation, however, slavery continued exist in many parts of the south until after the Civil War ended and the proclamation was read.

To help tell the story of the fight to end slavery, Natchez National Historical Park employee Barney Schoby Jr. portrayed a member of the U.S. Colored Troops. Dressed in full uniform on a hot June morning, Schoby gave passionate presentation — brandishing a rifle that he said a formerly enslaved member of the U.S. Colored Troops did not know how to use while he put his life on the line for a country that, at the time, did not represent him.

NPS officials thanked their local, state and federal delegation for making the Forks of the Road land acquisition possible as well as Ser Seshs Ab Heter C.M. Boxley and the Friends of Forks of the Road Society Inc.

“It is a moment that has long been welcome, worked on and coming,” Hatten said. “We are grateful for the focused effort of Ser Boxley and the Friends of Forks of the Road Society Inc. that have brought us to this day. … Their steadfast determination that ensured the site and this story would be preserved for future generations.”

Hatten said the entire Forks of the Road historic site encompasses 18 acres of land and the portion previously owned by the City of Natchez is a small piece of that land.

“We will continue to work in consultation with Ser Boxley and Friends of Forks of the Road and move forward with additional land acquisition within the sites 18-acre authorized boundary,” he said.

Gibson said nearly $1 million in federal funds have been committed to help NPS acquire more of Forks of the Road.

“Just last week the U.S. Department of Interior listed six objectives for the coming year with only six bullet points, and in those six bullet points there were only two cities in the entire country named. One was Selma, Alabama, and the other was Natchez, Mississippi, Forks of the Road,” Gibson said.

To imagine that these patriots laid down their lives for a country that at the time did not represent them.

A frame containing a bill signed by former Mississippi Gov. Phil Bryant, a proclamation by the City of Natchez and a proclamation signed by Gov. Tate Reeves about the conveyance of the property was given to Natchez National Historical Park Superintendent Kathleen Bond to hang in a future museum at the site, Gibson said.

The finale of Friday’s celebration was the unveiling of a new NPS sign to go on the property. The brown sign reads “Forks of the Road, Natchez National Historical Park” and has the NPS title and arrowhead seal across the top.