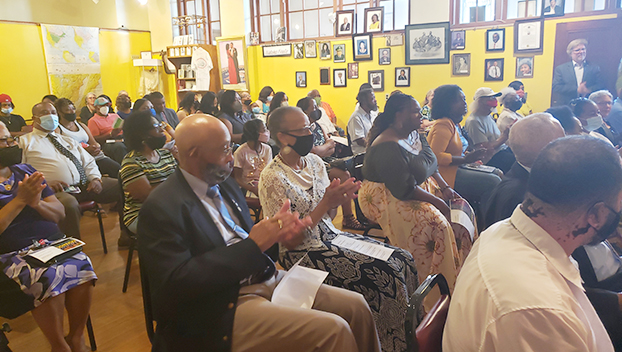 The museum was packed from wall to wall with people for the “Kickback at NAPAC” Juneteenth celebration.

Just as U.S. President Joe Biden signed legislation making Juneteenth a federal holiday, the holiday was celebrated at the museum with food, music, live poetry and a special presentation of awards for Black honorees.

Natchez Mayor Dan Gibson awarded three keys to the city on Thursday, one to the Rev. John Henry Hawkins, the Rev. Earnest Ford Sr. and to Francis Wallace, a volunteer at the NAPAC museum.

Wallace said she works as hard as she does at NAPAC to see her children and grandchildren have opportunities that they did not have growing up as a Black woman.

Ford, who is 85 years old, has been a pastor for more than 50 years in Natchez and Miss-Lou area. He started out on this journey in 1963 and still preaches today.

Hawkins has served the Natchez community and surrounding areas as a contractor, master builder and pastor. He owned and operated Hawkins Construction Company along with his sons Charlie and Dwane Hawkins for 50 years and has built the house at The Briars and Wyolah in Church Hill, which is owned by Tate Taylor and John Norris.

He has also performed major renovations on historic houses such as Concord Quarters, Weymouth Hall, Dunleith, Springfield Plantation, Peter Crist House, The Burnes, The Cedars, Fair Oaks, Waverly, Lagonia and many others.

Gibson also made several announcements on Thursday regarding the NAPAC museum.

NAPAC was founded in 1990 by Judge Mary Lee Toles with the help of Josie Gilchrist Camper, Mary White, Flora Terrell and Patricia Washington.

Gibson announced the City of Natchez has budgeted for new paint for the museum’s interior and new banners for the façade of the museum.

Plans are also in the works for a kiosk to go inside the museum that will allow tourists to virtually see a number of historic sites in the city that pertain to African American history. Additionally, QR codes placed on historic markers throughout the city will give tourists the opportunity to see the same stories on their mobile phone while visiting the cites.

“We really want to celebrate the African American history we have in this community,” Gibson said.