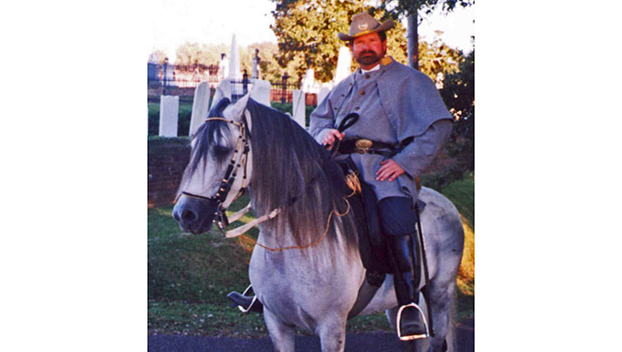 Terry Trovato, of Fairhope, Alabama, submitted this photo of Craig Bradford, an accomplished horseman, in the role of the ghost of Confederate Captain Thomas Bowie in an edition of Angels on the Bluff. “You can imagine the excitement of the crowd when he came riding out of the dark on his prized steed ‘Edelo,’” Trovato said.

NATCHEZ — Friends and colleagues of Craig Bradford, DDS, a long-time Natchez dentist who died in a tractor accident Saturday, said they could not believe Natchez lost such a great pediatric dentist and a great man.

He was 65 years old and was still a practicing on Highland Boulevard in Natchez.

“He was my best friend. There wasn’t a day that has gone by that I hadn’t spoke to him. He was wonderful to everyone and treated everyone’s children like they were his children. He and his wife Lynn were like my family.”

Andrea Bradford said there had been times when Bradford would help someone in need — without insurance or money to pay for a procedure — just because it made him happy to do so.

“We’re pediatrics and don’t usually treat adults, but we took care of this one girl and scheduled her in the morning before we started our regular day and he didn’t charge her a penny. This has happened multiple times,” Andrea Bradford said. “She would beam with pride. She could smile again and it made his day. He didn’t ever expect anything in return for the things he did. He believed if you treat others like family then you will have a good life and that’s what we live by. That is what we were still doing Friday when we shut our doors.”

Andrea Bradford said she and the other employees working for Bradford are still employed and are looking for another pediatric dentist to fill Bradford’s position.

Merideth Trovato, of Fairhope, Alabama, formerly of Natchez, said she worked for Bradford as a dental hygienist in the late 1980s and early 1990s.

“I dearly loved him and he was the best, best person to work for,” she said. “He was always kind, patient and generous to children. He also took time out of his day to teach me things that I didn’t know. I can’t say enough good things about him. … He was truly one of a kind.”

Bruce Scarborough, who worked closely with Bradford in the same office for more than 30 years, said “Most days it was like a circus and he would be the center of activity.”

“He often said his role was to make great dental patients for me,” Scarborough said. “He treated them in a way so they would not be traumatized out of going to the dentist as they got older.”

He said families would bring their children from all over the state to see Bradford, in part because he was one of few dentists who would allow parents to be in the room with their kids during procedures.

“He practiced so differently than most pediatric dentists,” he said. “I don’t know how he was able to concentrate but he did.”

Scarborough said Bradford was also a mentor to him.

“I would seek out his professional opinion on a lot of stuff,” he said.

Bradford has provided dental care to the children of Natchez and surrounding communities for 37 years.

He earned a Bachelor of Science in Biology from Mississippi State University in 1977, a Doctor of Medicine in Dentistry from the University of Mississippi in 1981, and completed a residency in pediatric dentistry at Primary Children’s Medical Center in Salt Lake City, Utah, in 1983, his obituary states. He was a long-time member of the Natchez Rotary Club, the Mississippi and American Dental Associations, the Pierre Fauchard Academy, and was a Fellow Diplomate of the American Academy of Pediatric Dentistry. He also served on the Board of Directors for Britton and Koontz Bank for 27 years.

Scarborough said Bradford also enjoyed golf, boating and raising horses among other things and traveled all over for horse shows.

“He threw himself into whatever he was doing,” he said. “He was really friendly guy, well-liked and knew everybody. … He often said the kind of dentist you are depends on the house you were raised in. He had a good upbringing and a good family life and that transferred into his practice.”

Bradford leaves behind a wife of 45 years, Lynn, and two sons, Chase and Cole, his father Clifton Bradford of Greenville and four grandchildren among numerous other relatives and friends.

Services for Bradford will be noon, Tuesday, June 22, 2021, at Jefferson Street United Methodist Church and visitation will be from 10:30 a.m. until service time Tuesday.