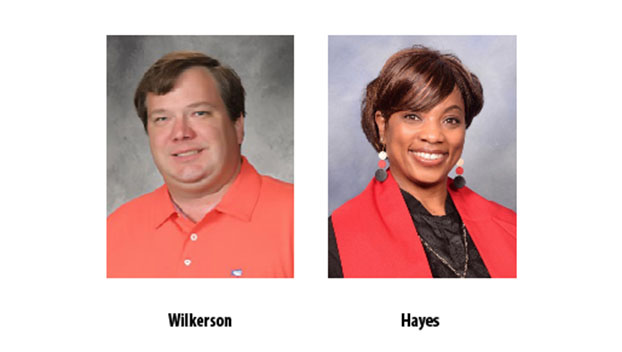 The new senior pastor, the Rev. Will Wilkerson, from Cleveland, will fill the pulpit of Interim Pastor Trey Harper with help from his new associate pastor, the Rev. Tara Hayes, who previously served as the campus minister for Alcorn State University in Lorman for five years.

Wilkerson said he grew up on a farm in the Lucedale area in George County, where his family grew vegetables, raised chickens and planted pine trees.

Wilkerson enjoys hunting, movies and going out to eat and is particularly excited about the many great restaurants in Natchez, he said.

He studied at Jones Junior College and the University of Southern Mississippi before attending the Asbury Theological Seminary in Wilmore, Kentucky, where he received a Master’s of Divinity degree as well as a master’s in professional counseling in 2004.

He comes to Natchez with 17 years of pastoral ministry experience.

He started his ministry as an associate pastor at St. Paul UMC in Ocean Springs and was later appointed to preach at Benton United Methodist near Yazoo City. He has been a pastor in Cleveland for the past seven years.

Wilkerson said his family is also looking forward to moving to Natchez, including his wife of 18 years, Ashley Dobbins Wilkerson, and their two daughters, Avery, age 11, and Sadie, age 8, who will both be attending Cathedral School in the fall.

“I have met quite a few members of the congregation and the people here have been very gracious,” he said. “I am very excited to come here … The Lord is opening up many different doors … I have visited Natchez many times while growing up and I’ve always found the town to be very interesting and beautiful and I love having the opportunity to live here, work and serve the community.”

Wilkerson said he intends to carry Jefferson Street UMC’s tradition of loving and serving the community with an open-door, open heart and open mind motto and with ministries such as supporting the Natchez Stewpot, helping the homeless and youth ministry.

Wilkerson also said he plans to see the church’s robust senior adult ministry continue to thrive and will continue to look for ways the church can be of service in the Natchez area.

“I want Jefferson Street United Methodist to be the type of church where anyone can feel welcome with a spirit of hospitality and love for anyone who comes in,” he said. “… We pride ourselves in dynamic, traditional worship and plan to continue providing the virtual services that we started during the COVID pandemic. Now that the pandemic has waned, there are infinite opportunities. It’s a new day and a new beginning for myself and the church post-COVID.”

Hayes said she is moving to Natchez with her daughter Karsyn, age 12, who will also be attending Cathedral School in the fall. Hayes said she enjoys working out, photography, reading, spending time with family and watching her daughter play sports.

She is a 2015 graduate of Gammon Theological Seminary in Atlanta and is originally from Winona. Hayes said her ministry started in Mississippi at Gallilee Treadwell United Methodist Church in Lexington.

“Though there are differences in parish and campus ministry, the mission always remains the same and that is to make disciples of Jesus Christ for the transformation of the world,” Hayes said. “I am excited about how God will use Jefferson Street in that continued mission as we engage our youth and community through love, discipleship, missions and justice.”

Hayes said her first visit to Natchez was while getting familiar with the city to come work at Jefferson Street.

“I love the city, the water and learning about the rich history here,” she said. “I’m excited about how Jefferson Street immerses itself in that history. The people of Natchez that I’ve met and the church has been so accepting. I’m ready to see what God is going to do.”

Miss-Lou has much to do to celebrate Independence Day