According to a news release from ACSO, an alarm at the business was activated during the early morning hours Tuesday.

When deputies arrived, they noticed a male inside the business and several four-wheelers on the showroom floor with the lights on. Deputies established a perimeter and secured the building and a K-9 was called to the scene.

Deputies entered the building through a window that was broken and used the K-9 to search the building. When deputies got to the back of the building, Darreonte Glover, 19, was taken into custody without incident.

Money that deputies believe was taken from the cash register was recovered during a search of Glover’s pockets. He was transported to the Adams County Jail and charged with burglary of a commercial building.

In the news release, Adams County Sheriff Travis Patten stated that he is proud of his deputies for recognizing the situation and controlling the scene until the canine was called and a successful arrest was made. 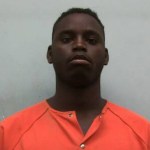 Patten said this is the second time that Natchez Powersports has been broken into and deputies were able to apprehend suspects.