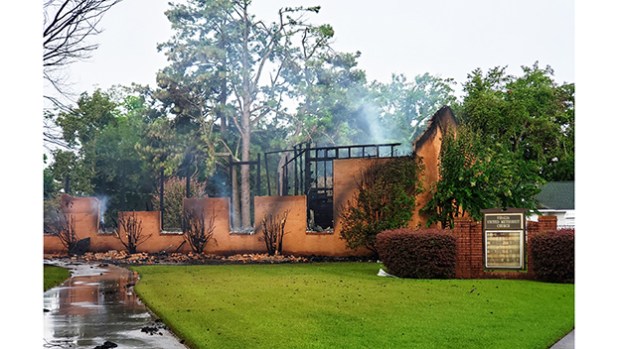 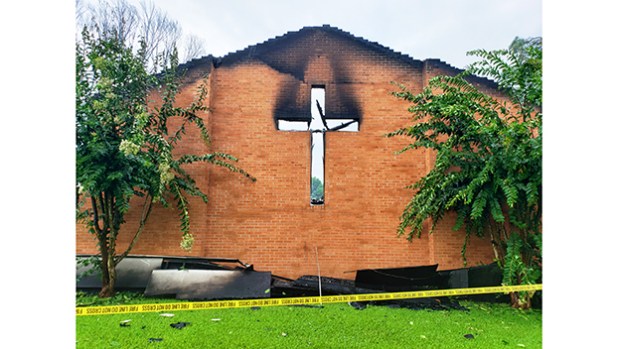 VIDALIA — The streets of the neighborhood surrounding Vidalia United Methodist Church on Oak Street were filled with people at approximately 5 a.m. Sunday as the church was engulfed in flames.

The Rev. Steve McDonald, who preached his first Sunday there on July 4, said the congregation of approximately 70 members felt a sense of loss as the approximately 60 years old building burned down.

As of Monday afternoon, the fire was still under investigation and a cause had not been determined, McDonald said.

“We had been in the church building on Friday afternoon and nothing was out of the ordinary,” he said. “Whether it was electrical, mechanical or human we don’t know.”

The fire could be seen from almost all parts of town, he said. Longtime church member Guylyn Boles said from her house on Myrtle Street she could see “an orange glow in the sky and it was not the sunrise.”

“Honestly, when I answered the phone and was told that (the church was on fire) I had to have them repeat it,” she said. “It’s just something that you don’t believe could happen.”

The church building was a total loss, McDonald said. However, there was no sense of the church being finished even as many in the congregation watched it burn.

“One of the amazing things was that while folks certainly had a feeling of loss — many precious memories of weddings, funerals, baptisms and great experiences going up in flames — there was not a sense of ‘it’s all over.’ The opposite is what emerged. This gives us an opportunity to start fresh and redefine ourselves in our community and our own image of ourselves.”

Boles said she and her husband Jim were married at the church, as was their son.

She worshiped within its walls each Sunday for more than 50 years.

Boles said she could see the precious stained glass windows were gone and didn’t think about the disaster but the people who donated those windows to the church and how much they must have loved the church to do that.

“The kind of things that I’m going to remember is how much that church has meant to people throughout the years,” she said. “It’s gone. Everything is gone but I’m not going to look at that for memories. I’m going to look at how many people have worked there and have been blessed there. We will rise again somewhere.”

Another thing that struck Boles during the tragedy on Sunday morning was the community response, she said.

“Neighbors who weren’t even church members went and got coffee for us and something from McDonalds to eat and took care of us,” she said. “Somebody I didn’t know was the first person to hug me when I walked up. I know her now.”

The fire was extinguished in approximately one-hour. Only the brick walls from the building’s sanctuary were left standing. Boles thanked the fire departments.

“Had they not come and sprayed the houses there would have been a lot more damage,” she said.

Boles said, “What we need now is prayer,” as the church decides what their next steps will be.

Word about the fire quickly spread on social media and people from all over the state offered to help, McDonald said. The son of a church pastor when it was built drove in from Baton Rouge to offer his support and wrote a check, he said.

Others have offered to help clean up and rebuild and asked to donate Bibles, hymnals and chairs and offered up space for church services.

“We had scheduled a meeting of the church council (Monday night.) They’re meeting in our house and we will seek to discern what God wants our next steps to be. … We hurt to lose all of this but the church is not just the building,” McDonald said. “That’s a good thing to come out of an experience. I know it’s a horrible tragedy but it might be an opportunity for something good to come.”

Former pastor Stewart Sherman preached there for four years before the Louisiana United Methodist Association assigned McDonald to be the new church pastor at the beginning of July.

“It was a shock,” Sherman said. “You don’t ever expect to get news that your church is burning.”

Sherman said he had been pastor of a church in Jonesville that had a sanctuary fire in 2017 and could empathize for McDonald and the church congregation.

“It is always difficult to recover,” he said. “The church now has two choices. They can let this knock them down or they can say we’re going to rise up to the challenge. This is also an opportunity. … This could make a closer bond between the congregation and the neighboring community. You never know how people are going to react to something like this.”