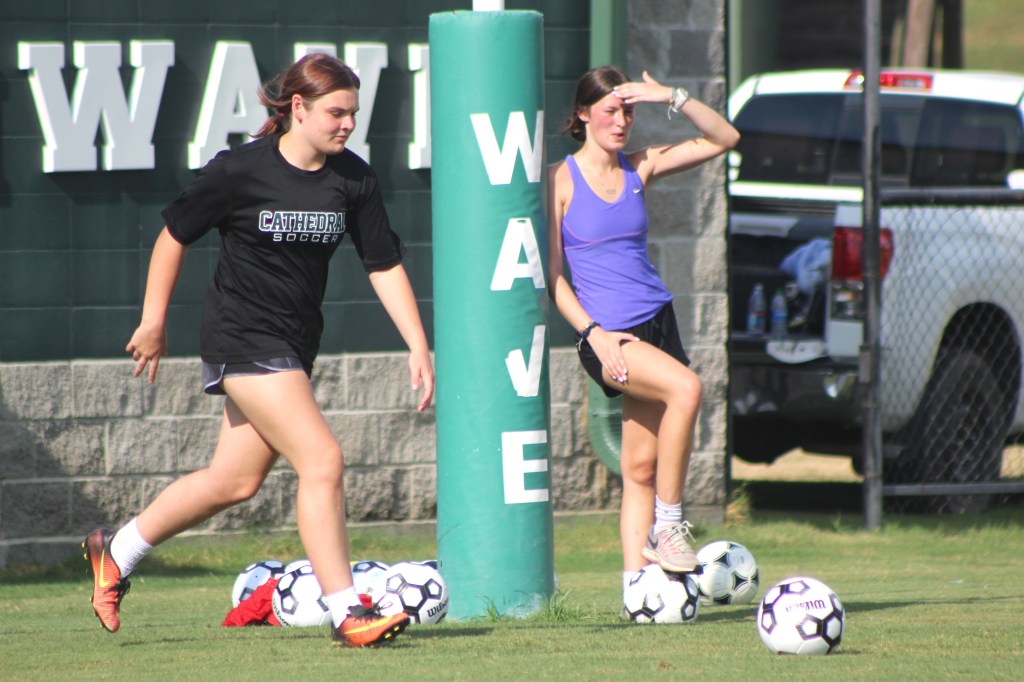 Cathedral’s soccer team spent their practice time learning how to improve their play out of the backline Wednesday afternoon. Their objective was to take a goal kick and cleanly get the ball up the field with a sense of urgency.

Head coach Dennis Hogue said the team recognized a problem with their goal kicks last weekend after making some mistakes in their tournament games at the Brookhaven Academy. He said they wanted to fix those issues before playing Laurel Christian Academy Thursday evening.

“Our Achilles’ heel for a while has been goal kicks,” Hogue said. “A smart team will recognize those who are weak at it and mark everybody waiting for a mistake. If we can improve on that, the rest of our game will be okay.”

Goal kicks are one of the ways a team can give away possession in a high-risk area if not executed properly. Before a goalkeeper launches the ball down the field, she must recognize where she can safely pass.

Infield players need to think quickly on their feet and also remember positioning. Hogue explained to his left and right backs the importance of holding the touchline. If they are on the line, they have an easier time keeping the ball in front of them before playing it up the field. If the goalkeeper does not get a clean connection with the ball, players must adjust and react. There is no time for players to think, he said.

“It is hard to get it in these girls’ minds where to move and why,” Hogue said. “They have to understand and recognize the situation on the fly. You have to give options.”

For example, players would stand in place and wait for goalkeeper Meredith Lessley to pass them the ball, he said. In practice, players moved around and opened up more passing lanes for Lessley.

Hogue said his philosophy is simple “If they can’t score on us, they can’t beat us.” If a game ended in a scoreless draw. It would be better than a loss, he said.

All week they have been working on improving their defense. Green Wave spent the majority of practice time in defensive drills on Monday and Tuesday.

“Wednesday, we came inside and did some classroom time and went out there to apply it,” Hogue said. “I think they got a good handle on it. They appreciate the urgency we have to have. I’m much more confident than I was last year.”