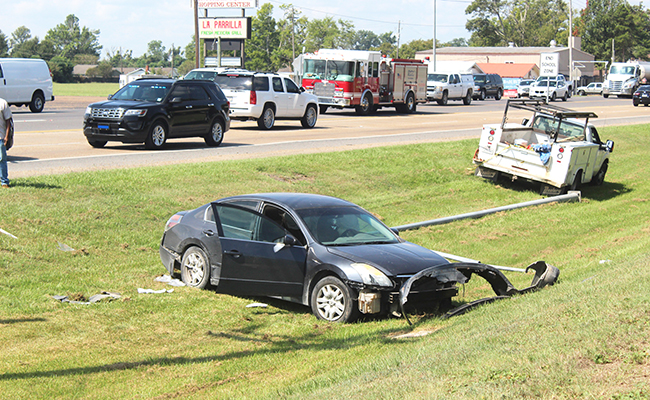 This gray Nissan was traveling westbound on Carter Street when it swerved at an intersection, left the roadway and struck a light pole. A passenger in the Nissan was taken to the hospital and so was the driver of a white Ford car, which was turning left from Murray Drive. (Hunter Cloud The Natchez Democrat)

Captain Craig Godbold with the Vidalia Police Department said the accident occurred at approximately 11 a.m. at the intersection of Murray Drive and Carter Street.

A black Nissan was struck in the rear passenger side by a white Ford Fiesta in the intersection, which caused the Nissan to veer off the road into a utility pole, Godbold said.

Both drivers were transported to Trinity hospital, he said.

The extent of their injuries are unknown at this time and the accident remains under investigation, Godbold said.