NATCHEZ — A jury was seated Tuesday and opening arguments began in the murder trial of Arthur Moore, 45, who is accused of killing James Henry Williams, 54, on Jan. 22, 2019.

Williams, a Natchez folk artist, was allegedly shot and killed by Moore after a heated argument between Williams’ brother and Moore at 9 Oscar St., Natchez. 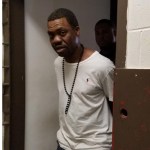 Sheriff’s deputies escort Arthur Moore in to the Adams County Jail in March 2019. Moore was arrested and charged in the Jan. 22, 2019, murder of James Henry Williams.
(Submitted file photo)

Moore’s trial was originally set to begin the week of June 28 of this year, was continued until Oct. 5 by Judge Debra W. Blackwell. Blackwell said she moved the trial date at the request of the state, which said one of the main investigators in the case would be unable to testify due to health reasons.

Moore was taken into custody in March 2019 after a two-month search that involved officers from the Natchez Police Department, Adams County Sheriff’s Office and the U.S. Marshals.