Learn more about older church building in Natchez on Oct. 10

Exactly 200 years ago this year, several men were having dinner in the Natchez home of Stephen Duncan. Close friends, they were members of the Anglican communion. 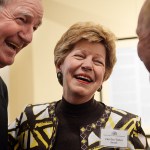 Natchez Literary and Cinema Celebration founder and co-chair Carolyn Vance Smith, center, laughs with her brother Bill Vance, left, and Glen Huff, right, during Smith’s retirement party at the Natchez Historical Foundation Saturday. Smith headed the NLCC for 26 years, bringing to Natchez talented writers and scholars from all over the world. (Sam Gause / The Natchez Democrat)

The first worship service took place in May 1823 in the large brick church. It still stands, the oldest church building in Natchez.

Construction dates are exact in church records and are confirmed by the appearance of Trinity in John James Audubon’s 1823 oil landscape, “View of Natchez, Mississippi.”

What attracted those men to Natchez so long ago?

You can find out when history professor and author Dr. Dennis J. Mitchell presents “Antebellum Natchez in Context” at 4 p.m., Sun., Oct. 10, at Trinity Church. This 30-minute program, partially funded by the Mississippi Humanities Council, will set the stage for Trinity’s creation.

It is the inaugural program sponsored by the Marion Smith Speaker Series, a ministry named in honor of a longtime Trinity leader and funded by his family.

The program will include the premiere screening of “Faith in Action Since 1822,” an 18-minute documentary film that traces Trinity’s history, missions and ministries.

This film was created by Patrick Doherty, G. Mark LaFrancis, John Norris, the Rev. Ken Ritter and Carolyn Vance Smith. Partial funding is from the Natchez Convention Promotion Commission with the remainder from church donors.

Following the documentary will be informal tours of the church and next-door Kuehnle Hall. Refreshments will be served.

Exhibits in Kuehnle Hall include a mid-19th century oil portrait of Bishop William Mercer Green by John Pope, called by Mimi Miller of the Historic Natchez Foundation “the finest portrait in Natchez.”

Also in Kuehnle Hall is an exhibit of original art called “Sacred Sites and Sights: Christ Church (1820) and Trinity Church (1822),” churches that are Partners-in-Mission.

These art works are by Andree Leckie Gamberi, Carolyn Cummings Gwin, the late Patricia McRaney Hootsell, the late Nancy Allen Ogden and Will Smith, Jr. All have ties to Trinity Church.

In the Rectors Room is an exhibit of photographs of all the rectors of Trinity Church as well as furnishings from the first rectory in 1850. In the rear foyer is an exhibit of colorful clerical garments and antique altar items.

In the front foyer is a reproduction of Audubon’s “View of Natchez, Mississippi,” along with a set of antique furniture given to the church by Trinity members Mr. and Mrs. F.D. Brown.

We are extremely happy to begin the celebration of Trinity’s bicentennial with this very special event.

We invite everyone to join us. For those who cannot attend, Dr. Mitchell’s program and the film will be posted at trinitynatchez.org.

I hope to see you there!