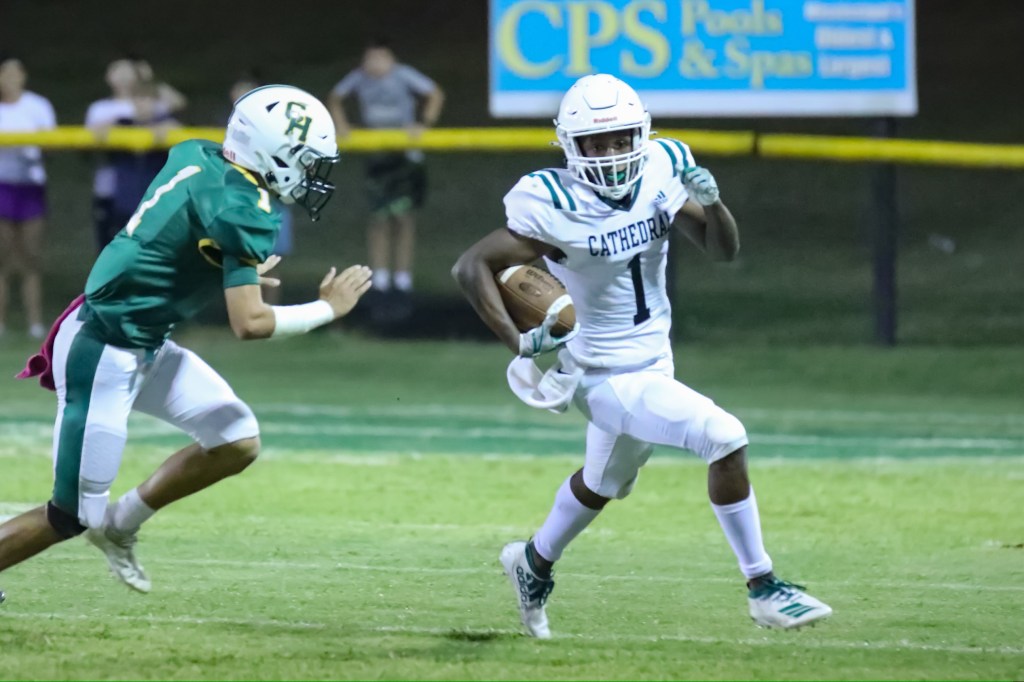 RAYMOND — Cathedral wore its all white uniforms when they took the field against Central Hinds Academy Friday night.

From the start, the Green Wave attacked the Cougars with a spirited effort but fell a point shy of a win 35-34.

Cathedral got on the board first with a five-yard rush by Kaden Batieste. He plunged up the middle to cap off the Green Wave opening drive. Head coach Chuck Darbonne said they had to play with high energy and they did so.

“We played with some high energy,” Darbonne said. “We missed some defensive assignments that cost us in the first half. Our kids battled and Noah (Russ) got a little banged up. We scored a variety of ways and a lot of guys are stepping up. We didn’t tackle very well on defense in the first half.”

Cougars took the lead on a run play to the right side and scored on third and long, They added an extra point to go up 14-7.

Batieste turned the game on its head when he took the ensuing kickoff 90 plus yards to the house evading tacklers. He stuck his arms out like an airplane as he cruised into the endzone. Cathedral added the extra point to tie the game at 14.

Russ suffered an injury to his upper body on the Green Wave’s following drive. A penalty negated a run and Cathedral’s drive stalled. Paxton Junkin moved from the receiver spot to quarterback.

Cathedral gave up a 99-yard touchdown run after multiple missed tackle attempts and the Green Wave fell behind by two touchdowns, giving the Cougars a 28-14 lead.

Refusing to give up, the Green Wave drove back down the field. Junkin took a low snap on fourth and six and he had trouble picking it up off the ground. Finally getting the ball secured, he picked up his head and used his legs to pick up a first down.

The next play, he rolled out to the right, avoided a tackle, and chucked a pass to the endzone which was caught by Christian Wright for a nine-yard touchdown. A bad snap on the field goal made the attempt fail as the Green Wave trailed 28-20 at half.

“It didn’t surprise me,” Darbonne said. “Paxton is athletic and a playmaker. It is why he is a kick and punt returner. It is why he stays on defense the whole time. He has a great football IQ. Some kids can learn it over time. He is a guy who can direct people on the field. There are things that come easy to him. He just knows.”

The Cougars opened up the second half with a 55-yard touchdown pass. Central Hinds led 35-20. Batieste and Junkin used their legs to march down the field and bring the game to one possession. Batieste scored on a two-yard rush and Junkin scored on the two-point conversion as he lowered his shoulder and into the endzone to cut the score to 35-28,

Central Hinds lined up for a 23-yard field goal but the kick was blocked and the Green Wave got the ball back down by seven points.

Junkin got the Green Wave within a point when he slipped through defenders and into the endzone on a 28-yard rush. Cathedral missed the extra point and trailed 35-34.

Batieste stretched the ball out to gain a first down and was ruled just shy of the first down, turning the ball over. Cathedral used its timeouts to kill the clock and keep the Green Wave in the game with 1:35 left. They forced a turnover on downs and got the ball back.

As they marched back down the field, a penalty was called on a blindside block and it took the air out of the drive. Cathedral completed one final pass in the dying seconds of the game but the ball carrier was stopped ending the game.

“A bad first half cost us, we did not do enough to overcome it,” Darbonne said. “I was proud of them. I challenged them at half time to play the Cathedral way. They came out the second half and played that way. We made some stops. It’s heartbreaking to be down by one with no timeouts. I had confidence in our kids. The penalty really hurt us with momentum. It is hard to put together a drive in a minute with two in a row negative plays. We lost another close one.”