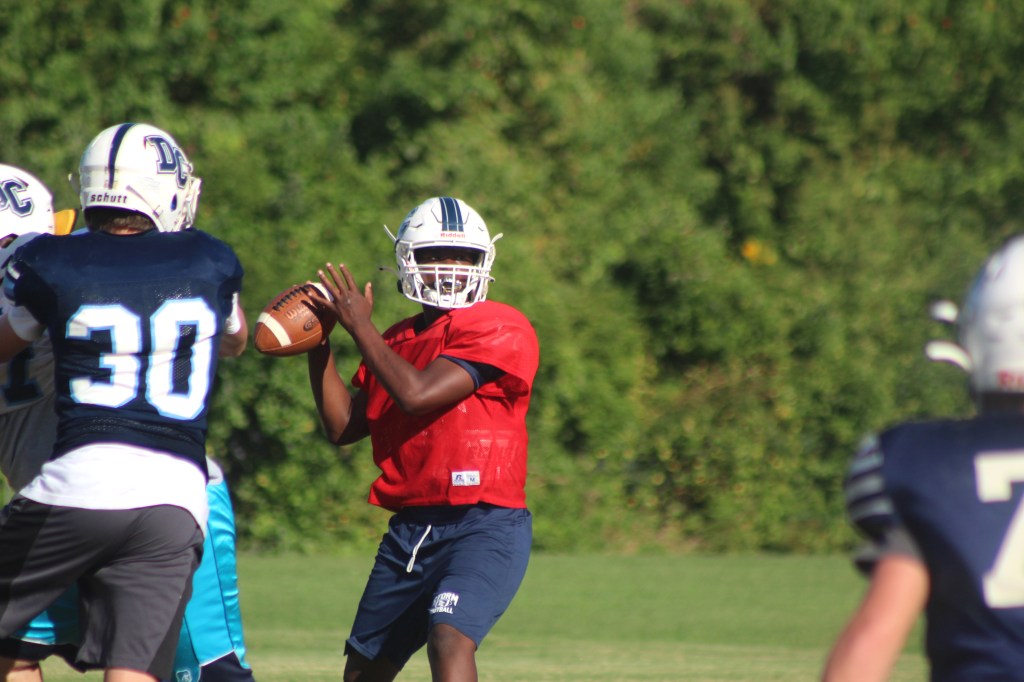 Juvari Singleton looks to throw during practice Wednesday afternoon. He threw for 257 yards and six touchdowns in the first six games of the season. (Hunter Cloud | The Natchez Democrat)

FERRIDAY — The Delta Charter School Storm will have to play its best game of the season Friday night when it plays host to the undefeated Ouachita Christian School Eagles in a key LHSAA District 2-1A game for both teams.

“This is a big game for us. We try to take these games one game at a time. They’re a good football team. We’ve got our work cut out for us,” Delta Charter head coach Blake Wheeler said.

As for how practice has gone so far this week, Wheeler said, “We’ve had a good week of practice. The kids seem upbeat. They’re excited about the challenge.”

Wheeler said his team’s offense has been working on different schemes to maximize what the Storm has on that side of the ball. Which will be critical against an Eagles defense that runs a 3-3 stack and brings a lot of pressure.

“Defensively, the run a lot of formations. They’ve got guys who will fly to the ball. We’re just trying to get used to all the looks we’re going to see,” Wheeler said.

While Wheeler said he was pleased with how hard the Storm played in last week’s win over Tensas High and how hard the running backs ran the ball, there were a few things he was not too thrilled with.

“We missed some blocks. We missed a lot of tackles, which is something we don’t normally do. We’re trying to clean that up,” Wheeler said.

Wheeler said that linebackers Curtis Bullits and Davis Cooper as well as offensive linemen Aidan Ferguson, Jared Barron and Chase McGraw will have to step up and have a game for the Storm to pull off the upset

Wheeler noted that Ouachita Christian’s offense is balanced between the running game and the passing game. He added that the Eagles will be the most balanced team that Delta Charter will face all year.

“They give you a lot of formations to look at. They can hurt you in a lot of different ways,” Wheeler said.

As to what concerns him the most about the Eagles, Wheeler said, “Probably their combination of size and speed. They’ve got a lot of really good athletes. They are fundamentally sound. They’re not going to beat themselves. You’ve got to beat them.”

Wheeler said that his team will have to play a near-perfect team to come out with a huge victory Friday night.

“We cannot turn the ball over. We can’t have any penalties. We’ve got to make tackles in space. We’re going to have to block extremely well,” Wheeler said.