NATCHEZ — An Adams County jury deliberated for 30 minutes on Friday and found Darnell Stevenson guilty for his role in the 2018 murder of Lewis Jackson III, aggravated assault of Joshua Beamer and Alicia Mason and a drive-by shooting at Holiday Apartments. 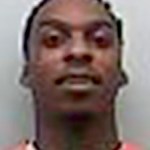 “I am glad to give some comfort to the Jackson family,” said Adams County District Attorney Shameca Collins. “Mr. Jackson was very active in the lives of his five children and was gunned down walking out of an apartment. Mr. Beamer and Ms. Mason were in their bed when their apartment was riddled with gunfire from an assault rifle. No one should have to live in fear in their own home. I would like to thank the men and women of the Natchez Police Department for doing a great job and Judge Blackwell for handing out an appropriate sentence for such an atrocious crime.”