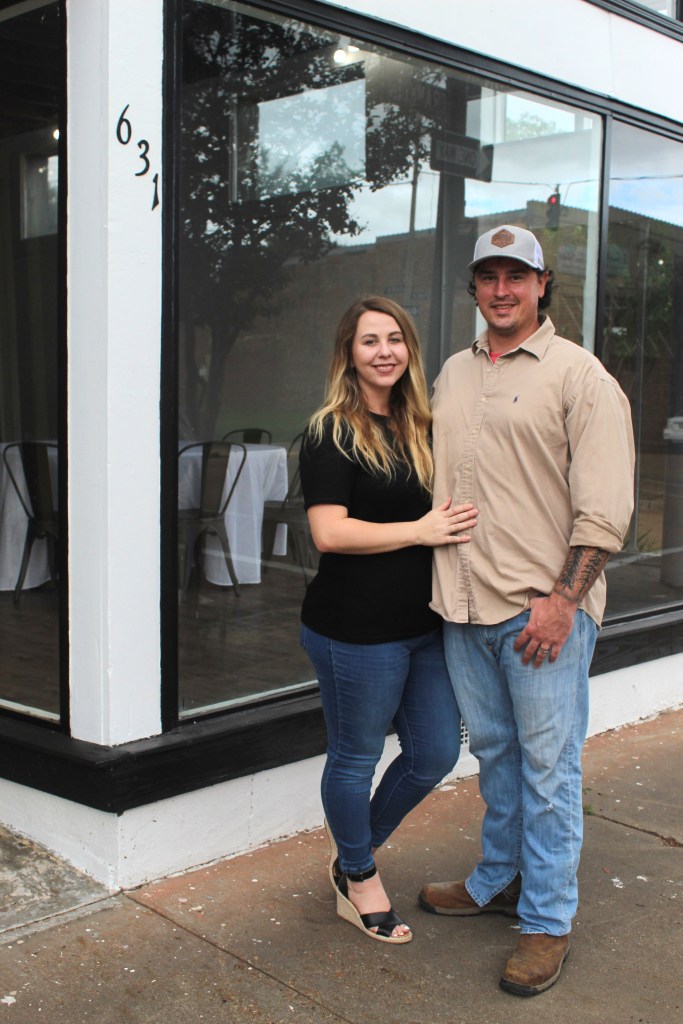 Taylor and Trey Cooley stand outside of their project space called Cooley & Co. on 631 Franklin Street. The white exterior makes the building stand out on Franklin Street. (Hunter Cloud | The Natchez Democrat)

NATCHEZ — With a white exterior, Cooley & Co. stands out at its location on 631 Franklin Street. The building houses different projects of Taylor Cooley and her husband Trey Cooley.

Recently, she decided to turn the front room into an event space, after originally planning to make the building a photography studio.

United Mississippi Bank foreclosed on the building seven years before she bought it, she said. The building was in bad shape before the bank took ownership, and it has taken time to renovate the space because it needed a new roof, flooring, plumbing and HVAC.

“Even every wire had to be new,” Cooley said. “We closed on March 31, 2021. I happened upon this building and loved it. I liked the exposed beams which we have left. They weren’t exposed when we bought it so we had to uncover them under multiple ceilings.”

She said it had always been her dream to open a wedding venue. Cooley and Co.’s event space is smaller and more manageable as she tests the waters in event management, and presents a unique modern iindustrial look with the metal light fixtures, exposed beams and brickwork.

A sliding barn door, which separates the kitchenette from the event space, is stained to match the ceiling and wooden beams. The hardwood floor is similar in color although a bit lighter. Cooley found two doors from the old Eola hotel. She wants to use them as front doors for the building. She is getting them stained to match everything else but she said they have to be approved before she can add them.

“I had a specific vision for my husband to achieve. I wanted an industrial and unique look with an historic kind of vibe,” Cooley said. “Our adjustable lighting helps add a romantic feel as well. It has been a ton of work but we got it done, mostly Trey. I was also pregnant with our fourth child during the renovation, which added some extra juggling to our schedule.”

Speakers are attached to the wooden beams so there can be music for the events. They have electric outlets in the floor so people can set up equipment for an event. On top of the wooden beams in the ceiling are more power outlets. This allows people to hide their extension cords for string lights if they need them.

“Everything here was done with pictures in mind. The walls are painted white because they photograph the best,” Cooley said. “When photographing another person’s wedding, I hate editing out wires, so we eliminated that problem. We tried to pay attention to every detail.”

It is just the start of Cooley’s dreams. She would like to have an outdoor wedding venue one day. Currently, they have started reserving dates in the calendar for the event space. There have been a few free events to test the waters, she said.

“I captured everyone’s memories for so long,” Cooley said. “I wanted to open a space where people could come to create memories.”