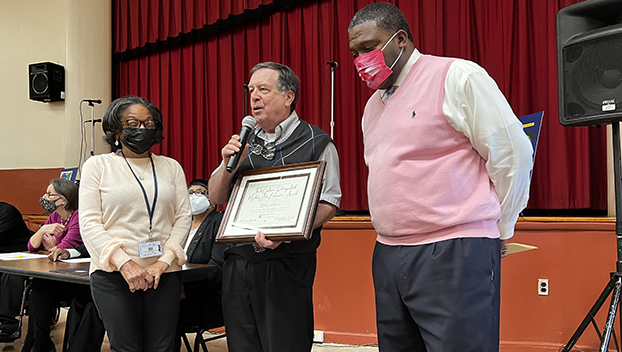 NATCHEZ – The Natchez Adams School Board of Trustees recently presented a high honor to one of its teaching artists.

Mark LaFrancis, a teaching artist at the Fallin Career and Technology Center, received the Thad Cochran Distinguished Media Arts Educator Award, an award sponsored by the Mississippi Alliance for Arts Education. LaFrancis teaches film and photography in the Digital Media Technology Program at Fallin. He works with students in the class with instructor Laveria Green, who has received an award from the Mississippi Alliance for Arts Education, a private, non-profit organization promoting arts education throughout the state.

“He helps them develop a love and passion for both film and photography,” said Cleveland Moore, Fallin principal. “So, we’d like to honor and thank him for all the work he’s done at Fallin, and in the Natchez community.”

Green said of LaFrancis, “You do awesome work. You’re a great teaching artist.”

LaFrancis works with students to learn the fundamentals of photography composition and editing. The students have produced three exhibits, one of which, “Shadow Stories,” is on display at the Judge George W. Armstrong Library. Photography students are in the process of creating a new exhibit.

He also coaches students in the fundamentals of film making and editing, including the use of green screen technology. Several students have won film awards at regional and state competitions.

“It’s an honor to work with Fallin students,” LaFrancis said. “They catch on quickly, and are very creative.”

This is his second award named after the late U.S. Sen Thad Cochran, R-Miss., a fervent patron of the arts and humanities. He has received the first Thad Cochran Humanities Achievement Award for his and his Co-Lin students’ documentaries “Richard Wright: a Force for Right,” and “Eudora Welty: Woman of the World, Daughter of Mississippi,” which premiered at the Natchez Literary and Cinema Celebration.

An independent filmmaker, LaFrancis directed and co-produced the award-winning documentary “The Parchman Ordeal: The Untold Story,” which has won several awards at film festivals. He and his team currently are in pre-production for another Civil Rights-era film “Women of the Struggle: Facing Fear in the Civil Rights Era.”