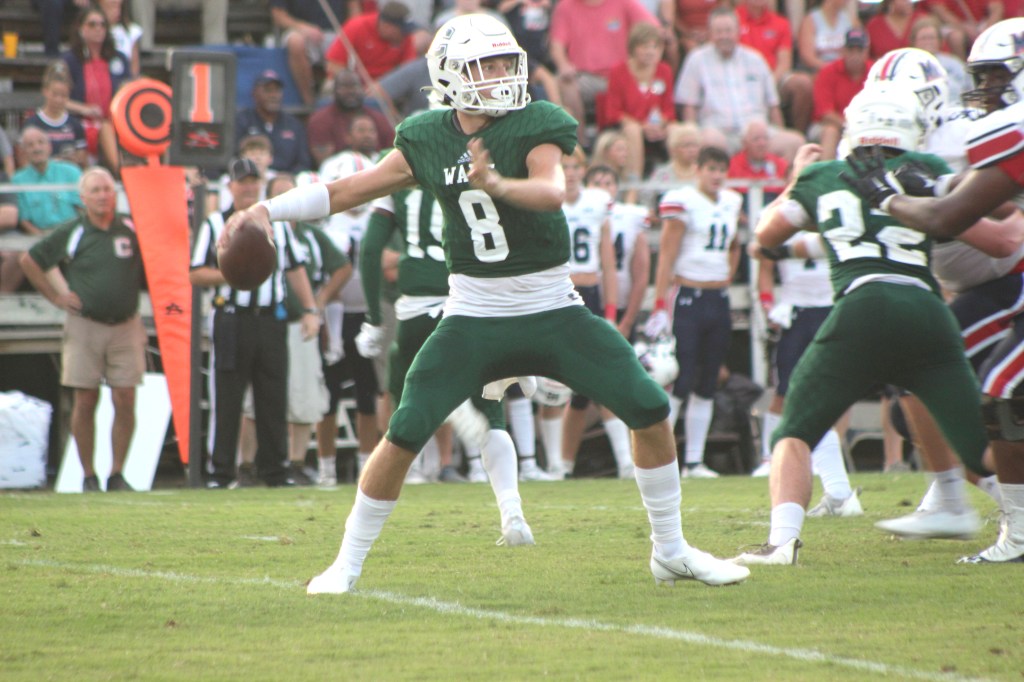 A junior quarterback, Noah Russ has accounted for 1,821 of Cathedral’s 1,880 passing yards this season. His go-to receiver is Christian Wright who has 875 receiving yards. (Hunter Cloud | The Natchez Democrat)

NATCHEZ — As Cathedral travels to Clarksdale to play Bayou Academy on Friday, they bring a dynamic duo through the air with junior quarterback Noah Russ and senior wide receiver Christian Wright.

They have been instrumental to Cathedral’s passing attack, which has accounted for 61.8 percent of the Green Wave’s total yards this season. Russ is averaging 182.1 yards per game through the air, an improvement of 40 yards from last season. It was the first year he started at quarterback for the Green Wave.

Russ’s career as a quarterback goes as far back as AYA football, which he started in third grade. He made the move to quarterback his fourth-grade season, he said. The position is one he enjoys, although it does come with challenges.

“I like how you are involved in every play,” Russ said. “It was challenging to get the chemistry down with my receivers. I had to build it through extra work and throwing routes after practice. Sometimes we hangout outside of school.”

He built chemistry with receiver Wright who currently leads the Green Wave in receiving yards with 875 this season. His path to football began by playing the sport during recess, he said.

At one point he played offensive lineman before moving to quarterback at Vidalia. In January 2020, he transferred to Cathedral and began playing receiver. Building chemistry with Russ has been easy, he said.

Repetition is the main ingredient for Wright. Typically, he can be seen running hills with other players after practices. Reps are also how he built chemistry with Russ.

“I want to be able to make it to the next level,” Wright said. “I feel like we built our chemistry last year when we were quarantined. We still worked out together.”

Transitioning from quarterback to wide receiver at Cathedral was not weird, he said.

“I just took on the role to be able to win, I couldn’t do his job and he couldn’t take mine,” he said.

Wright and Russ are dual sport athletes. While Wright plays basketball, Russ is a pitcher for the Green Wave. He plans to take the baseball diamond this year.

Afterall, it is a sport he has always loved and one he has always played, he said. Additionally, it is how he discovered he could throw the ball well.

“My arm has gotten a lot stronger from throwing a ton during quarantine. It’s a different motion (than throwing in football) but long tossing with the baseball builds your strength.”

Friday could be the last game for the Green Wave this season. If Wright catches passes for 125 yards then he will break 1,000 yards receiving this season. If Russ throws for 179 yards against Bayou Academy, he will break 2,000 yards passing this season. According to Max Preps, he is in the Top 10 for passing yardage in Mississippi at No. 8. Wright is in the Top 10  for receiving yardage at No. 9. These milestones are not on their mind, instead they are focused on getting better and advancing in the playoffs.

“I’m just playing as we go, my main milestone is to be better this year than I was last year,” Russ said. “We are determined to win. We want to keep on playing and get a ring.”